PokerStars has a lot of low-to-mid stakes sit & go grinders on the site, and the SCOOP-12-L event was their chance to shine and show off the skills that make them a living day in and day out. So many recreational players favour this format as well, due to the short time commitment required to play a game from start to end. This one's always popular and so it proved again.

Brazil has had a remarkable start to the series and that run continued tonight as GhRibeiro won their seventh title, in just the 12th round of events. The player bettered a field of 3,354 players en route to the win and earned $13,176.26. The tournament had a guarantee of $50k but the great turnout saw that number swell to $82,340.70.

There's a pretty easy target to make the money in a shootout tournament - win the first table. When we say easy, we mean easy to understand. Being a 6-Max in format, you have to deal with short-handed play, never get to move away from the player to your left, and then play a (potentially) fierce heads-up battle. And that's just for a min cash; GhRibeiro had to win three more tables to claim the title.

Talking of min cashes. Fourteen PokerStars Pros dipped their toes into this one and three went on the make the money. Lex "L. Veldhuis" Velduis, Jamie "jamiestaples" Staples and Chris "Money800" Moneymaker all won their first round Sit & Go to secure a $135.03 payday, but all fell in their respective second rounds.

The final table got down to the last two in a short amount of time which meant GhRibeiro and berman AS had a lot of chips to play with compared to that stage normally. They both settled into small ball approach, but all that changed 25 hands in. berman As 5x the big blind off the button and GhRibeiro went the time bank before three-betting out of the big blind. berman As's response was to move all-in for an effective 62.8 bbs with T♠T♥ but GhRibeiro was sitting on K♦K♠ and called. The board ran blank and berman AS's stack dropped to 24 big blinds. Still plenty to play with but a position the player would never recover from.

Another 17 hands passed with berman As failing to get over 15k, and then it was all over the next hand. A limped pot brought a Q♥T♥A♦ flop and GhRibeiro check-raise-called the Bolivian's bet-shove.

GhRibeiro: A♥5♥ for top pair and nut flush draw.
berman As: 3♥7♥ for a smaller flush draw.

Everyone who won their first table locked up $135.03; everyone who got through the second one saw their prize increase to $576.38; and going three in a row got you to the final table and a minimum payday of $2,042.04.

That's as far as mindgamer managed to go. The Austrian raised and was called by berman As along with 85blackswan. The flop fell 6♠T♠A♦ and berman As raised mindgamer's c-bet. 85blackswan folded and the rest of the chips went in on the K♥ turn. The river came as the 7♣ before mindgamer saw his set of kings had lost out to his opponent's Q♣J♥ for a straight.

The short-stacked IVIegahit was next to go. The Norwegian made a move from the button with 9♣7♣ but eventual champion GhRibeiro was at behind with A♥K♠ and successfully re-shoved to isolate. The board ran blank and the final four remained.

85blackswan went from having a straight to be straightened out, after berman As caught a river bluff all-in. The board read 2♠5♠K♦9♥K♣ and berman As led and then tank called the shove holding 6♣6♠. It was a great call as 85blackswan opened J♦T♣ and was a goner.

AZUncle had mostly kept out of the big confrontation but Mexican lost ace-over-ace to GhRibeiro before busting to the Brazilian the very next hand. Holding K♥8♦ in the small blind and sat on around 15 big blinds the player limped in and then called all-in after GhRibeiro shoved. It was a good call as GhRibeiro opened a dominated K♦4♦ but destiny brought a 2♣5♦6♥A♠3♣ board and a wheel, and the Brazilian would go on to fulfill a bigger destiny one exit later. 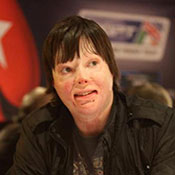