Gerard Piqué returns to EPT Barcelona (interview from the archives)

Gerard Piqué is becoming a staple of the EPT Barcelona action. 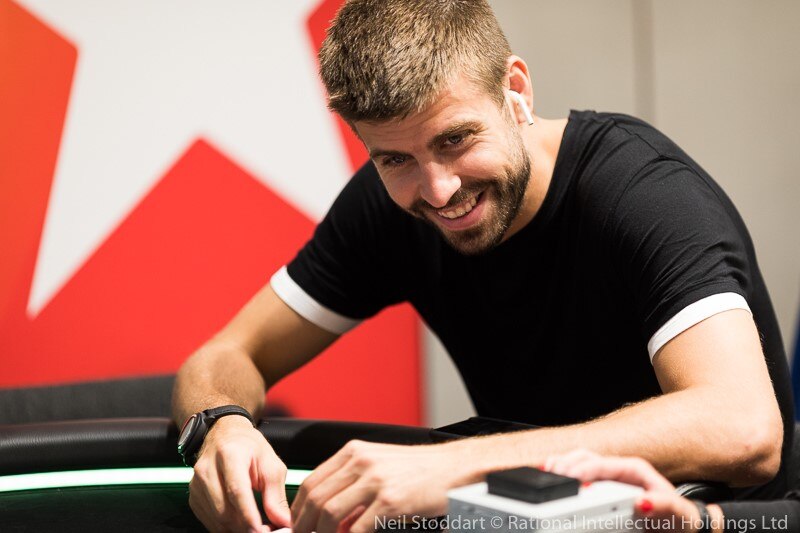 PiquÃ© is in town at EPT Barcelona

Yesterday he returned to Casino Barcelona to play in the €10,000 High Roller, but after firing two bullets his tournament came to an end. Don't be surprised to see the FC Barcelona superstar back in action later in the trip though.

For now, to celebrate his return to the poker felt, we thought we'd take a look back at an exclusive interview with did with Piqué at EPT Barcelona back in 2016. Enjoy.

Gerard Piqué: On poker, his teammates, & that feeling in his stomach

He's one of the world's most famous footballers, but he's found another game that sends his adrenal glands into overdrive. In a private interview, Gerard Piqué dives into his love for poker and what happens behind the scenes at the Camp Nou.

Celebrity is a concept most of us will never be able to relate to. Let's pick a famous person completely at random; say...oh, I don't know, FC Barcelona and Spain centre-back Gerard Piqué.

His work is viewed weekly in person by tens of thousands and broadcast live to hundreds of millions. His salary is in the several millions. He's married to a person considered a hero to millions. He himself is a hero to millions, forced to be permanently accompanied by security guards due to the sheer adulation and love he receives from members of the public.

His is an unrelatable lifestyle. But there is something about Gerard Piqué that many of you reading this article can relate to:

Gerard Piqué loves the game of poker. He plays it publicly, without contractual obligation; without fear of judgment from colleagues; and without the need for millions to know he's doing it.

If you're unaware of this man, let me bring you up to speed. Gerard Piqué is considered to be one of football's greatest defenders of the past two decades, perhaps of all time. Born in Barcelona, the 29-year-old has a career chock full of highlights:

These are just a few of his accolades. Oh, and he's married to Shakira.

I sat down to talk to Gerard Piqué at the European Poker Tour stop in Barcelona this August where he'd come to play in the €50,000 Super High Roller. There, in a private room on a private floor accessed via a private elevator, Piqué spoke to me with passion, humour, politeness, consideration, and attentiveness.

And yet it was clear this wasn't his ideal scenario. If he truly had his way, it's safe to assume he would avoid any hubbub. He'd simply slip into his favourite (and in this case, home town) poker room unnoticed, sit down at the felt, and pit his wits against the other players, just like many of us do both live and online.

You never know what will happen

"I've played over 400 [football] matches, but I still always have this feeling in my stomach and some nerves," Piqué told me. "For me, the experience before playing poker is the same as before playing a match."

Now, you might be thinking "Why is he nervous? Piqué can afford €50,000". Or "Oh sure, I'd be pretty nervous playing in a €50,000 Super High Roller too instead of the micro-to-mid-stakes tournaments I play on PokerStars." But the truth is, they're both relative.

When you sit down on any given night and fire up the Big $11, presumably that $11 buy-in isn't going to break the bank. We play for the challenge and the fun of poker, right? But we also hope for results, and a big result can bring big rewards, both financially and personally.

Regardless of whether you're Gerard Piqué or an MTT grinder hoping to move up in the stakes, it's the challenge and fun of poker that attracts us, and the potential rewards that inspire us. This is also true of those who play football for a living. In fact, the two games appear to have a lot of similarities, as Piqué explained.

"On the pitch you never know what will happen, which is the same as poker. You can have your strategy and know how you will play, but you never know how the cards will be, and you have to adapt to every situation.

"During a match you have to make decisions that are risky, and some are not on the pitch. This is the same as poker. You have to control the risk. If you're a striker you can take higher risks, because if you lose the ball you have the rest of the team behind you. If you're a defender or goalkeeper you can't take as many risks, because if you lose the ball you can concede a goal. You need to evaluate the risk and think about the reward."

Piqué is certainly no stranger to the EPT (soon to become the PokerStars Championship). He's been a regular at EPT Barcelona, with his first cash coming back in 2011 when he finished third in a €5k side event for €40,950. He followed that up in 2013 with a 19th place finish in the €10k High Roller, cashing for double the buy-in. I asked him what he remembered about making that first final table.

"Yesterday I made another final table, but you don't know that yet because it was too late!" he replied, laughing.

His story did indeed check out. The night before this interview and the start of the €50,000 Super High Roller, Piqué sat down to play in a €2k Hyperturbo side event, eventually finishing in third place once again, this time for €31,700. It's clear then that is a man driven by his love of poker, rather than just seeking the million-plus scores.

"I really enjoy it a lot," he says with clear sincerity. "I mean, for me I love to compete in many different situations and I always like to compete with the best in everything, in this case against the best poker players. When I sit down at the table and I know I'm against some of the best players at the poker table I really enjoy the challenge."

Pique, a fixture at EPT Barcelona, playing in Season 10

With his confidence high from the late night final table the previous evening, the fixture of the day was Gerard Piqué vs a talented field of Super High Rollers. I wondered if he ever felt that the Jason Merciers, Daniel Negreanus, and Fedor Holzs of the world played differently against him due to his football fame.

"I don't know if they play different," he replied candidly. "Obviously it can be a bit strange for them because some of them know me from football, but not from playing poker. So it's kind of a strange situation."

But there are some people who certainly know him from both - his FC Barcelona teammates.

Poker in the Camp Nou

Teammates Pique and Neymar at the felt

A regular workweek for an FC Barcelona player involves travelling, training, and playing in the Camp Nou (the team's stadium). So when players of Neymar's (fellow FC Barcelona superstar and self-confessed poker nut) and Piqué's stature slip off during the football season to play at the EPT Grand Final in Monaco, or more locally at EPT Barcelona, you'd think it might raise a few eyebrows with the club and their teammates.

According to Piqué, though, the opposite is true.

"They really like it," he told me. "Our teammates know we come here, and they always ask how it goes and if we enjoyed ourselves. The problem is they don't know how to play poker and if they did, they would probably come too!

"We do sometimes play in the dressing room; obviously not for money, but just for fun. It's fun because everyone loves poker, and not just to play. The players who don't know how to play like to watch."

Regardless of the size of your personal bankroll, it can still be a bit nerve-wracking to sit at a poker table with professionals for the first time. I wondered who he thought the best poker players in the football world were that he had played against; who helped him cut his teeth?

"It's difficult to say, but Eider Gudjohnsen is a really good player, and when I joined Barcelona we used to play here a lot together.

"There are more very good poker players in the [Spanish] national team like David De Gea and David Silva. I'm trying to think of the best ones because we play with 15 players, and it's always the same ones that win!

"For example, in the last Euros [the UEFA European Championship] we had a lot of free time in the hotel, and playing poker is a great way to have fun when we have spare time."

A game of two halves

Unless you're Manchester United legend Eric Cantona, there aren't too many figurative or metaphorical expressions in football. "Man on!" literally means there's a man on you, and you're about to be tackled. "Keepie-uppies" literally means keeping the ball up in the air.

"A game of two halves" though can be taken different ways. Sure, a 90-minute game of football is literally a game of two 45-minute halves. But it also means that both teams each dominated a half. It shows that the game can change unexpectedly from one minute to the next.

If you step back and look at the big picture of football, then a footballer's career is also a game of two halves. The first half is their playing career, which barring injuries will usually wind down in the mid-to-late thirties. The second half is whatever they decide to do next.

As poker is a game in which age is just a number, I wondered - could we see Piqué more often at the poker felt when the time comes to hang up his boots?

"I love poker as a hobby, and I'll maybe play some tournaments, but not as a professional," he told me. "When you have a family and you have kids you don't have time to travel all over the world playing poker. But I obviously enjoy it a lot and will always try to play when I have the chance."

There's a glint in his eye that suggests his competitiveness won't keep him away from the poker felt for too long.

How about swapping one of his many football trophies for a PokerStars Championship?

"...But there's no way I can trade one of my football trophies for one!"

Oh, Gerard. And you were doing so well at being relatable, too. 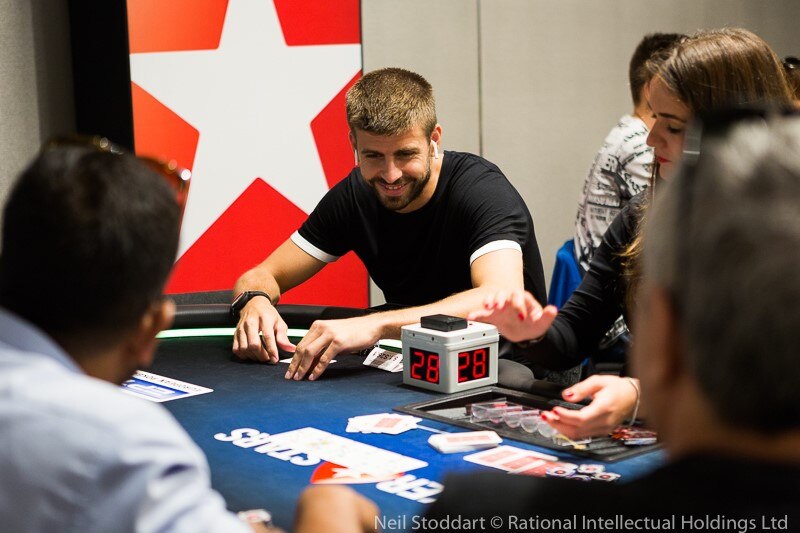 Jack Stanton is a freelance writer and regular contributor to the PokerStars Blog. 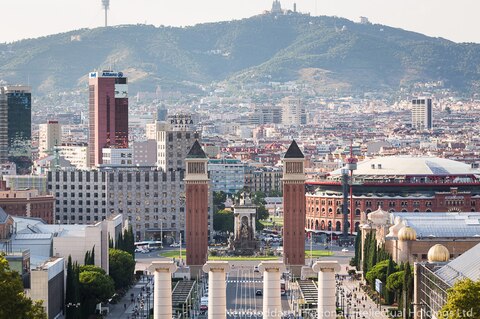 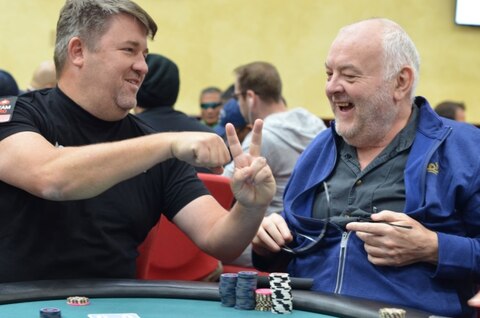 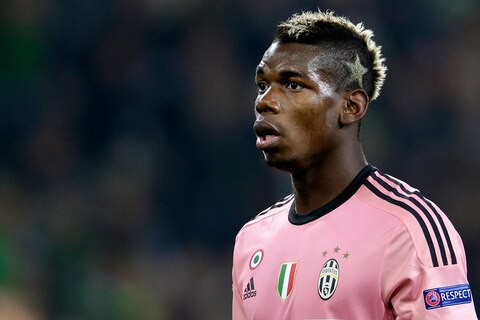 What does Paul Pogba's haircut say to you?