It’s been a good few days for Jason “jcarverpoker” Somerville and Jeff Gross in particular, as you’ll see below. Hero call with the final table in sight? NO PROBLEM.

Jason is back in action on Twitch and delivering maximum entertainment value. He made it through to Day 2 of Event #25-M, $215 8-Game. As his 11,200 peak viewers already know, he had some highlights worth looking back at, including this 1-million-chip pot against fellow Twitch streamer IrGeption:

Here he is making a hero call with nine players left and his tournament life on the line.

Fresh off a High Roller cash at EPT Barcelona, Jeff Gross celebrated his 32nd birthday in style with a final table appearance in the $1,050 Super Tuesday Special Edition. Jeff had 1,700 peak viewers watching as he outlasted all but eight other players from the field of 1,092. He got it in good with Q-Q against A-K but lost the race and finished in 9th place for $14,337.30

WoW what a run in the #WCOOP $1,050 Super Tuesday @PokerStars Final Tabling on my Birthday thank you for the support @PokerFlowShow @TwitchPoker @BahaMarResorts ! pic.twitter.com/EVEh15d71p

That went a bit better than things did when he suffered a bit of Misclick Madness in the $530 Bounty Builder, then made the correct call over on Event #31-M:

Just another day in the life of an online poker pro.

Not all misclicks work out so badly. Check out Lex Veldhuis’s misclick adventure in Event #11-L.

Meanwhile, on the non-WCOOP front, Igor Kurganov added another High Roller cash to his lengthy resume. He finished in 6th of 57 entrants in this week’s $2,100 Sunday High Roller, taking down $10,384.92.

Mama said knock you out

With more and more WCOOP events playing out, our Team Pros are piling up knockouts and there’s a betting market running at BetStars to see who will be the KO King by the time the schedule is complete. 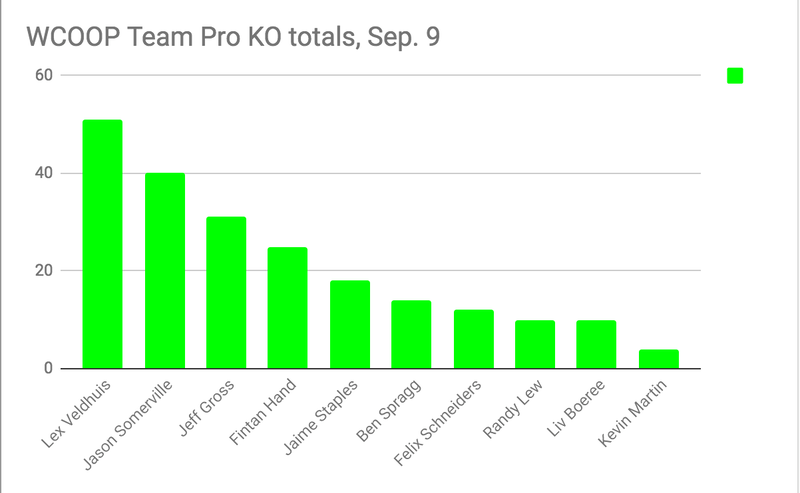 Lex Veldhuis is the KO King at the moment, but Jason Somerville is closing in quickly

Lex Veldhuis still leads the way with 51 knockouts, up from 35 on September 7th. Jason Somerville and Jeff Gross are both closing on him with 40 KOs (up from 18) and 31 KOs (up from 12) respectively. Fintan Hand and Jaime Staples have just begun playing events and have moved into 4th (25 KOs) and 5th (18 KOs), so the competition is still wide open right now.

Good luck to everyone as WCOOP continues!

Does watching all these top pros have you ready to start playing poker? Click here to open a PokerStars account.