In what proved to be a record day for Korean poker the Jeju Red Dragon Main Event Day 1B saw 237 players ante up the ₩2.2M entry fee and fight it out at the felt. Combined with the 376 Day 1A entrants, this brings the total field up to 613 – officially setting the country record for the largest Main Event field in Korean history. There was a lot of change in the chip counts in the last few levels of the day but in the end it was Tian Le Wang who made it through to Day 2 with the chip lead. He is followed by Kun Wang (139,500) in second place and Yipeng Huang (115,900) in third. Day 1A winner Hao Qi Xie will return tomorrow with the biggest stack across both starting flights. He brings through a very impressive 218,000. The only player to exceed the 200,000 mark. Players who didn’t make it through include PokerStars Team Pro Celina Lin. Although off to a good start in the first half of the day, the rest of the day proved to be very frustrating, with Lin losing a series of pots versus short-stacked opponents that chipped away at her stack before she finally hit the rail. Others that failed to qualify were Michael Soyza, Yuan Li ‘Sparrow’ Cheung, Wilson Lim, Alvan Zheng and Linh Tran. 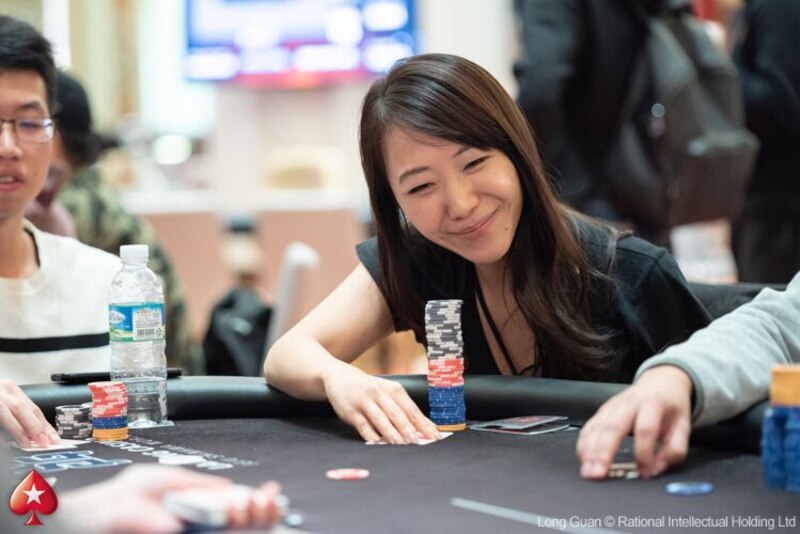 So that concludes Day 1A & 1B. Now it’s time for players to get some rest before returning to the Landing Casino for 2pm tomorrow. Blind levels will increase to one hour and nine levels will be played in total, with a one-hour dinner break. Taking into account breaks, the tournament is expected to pause at around 12:30am, ready for Day 3 on Saturday.

Day 1B has concluded. The numbers are being calculated and all the information compiled. Stay tuned for a full wrap.

The clock has been paused and every table will play another six hands before players start to bag up for the day.

Kun Wang is currently the chip leader, with around 160,000. There is still 20 minutes or so on the clock so this could still change. We will keep you posted.

As Day 1B begins to draw to a close, some of the bigger names in the tournament have some of the largest stacks…will one of them be today’s chip leader?

As predicted, the field has dwindled significantly in the last hour with 108 left in the running at the moment. We are likely to see this number drop in double figures before the night is out.

Some of the names that have hit the rail are Yuan Li, Linh Tran and Jin Tian. 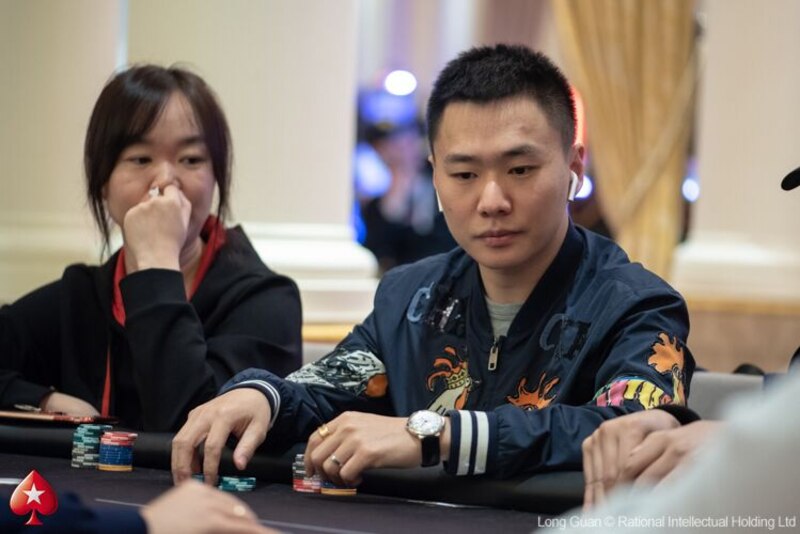 Not long ago, James Won Lee was one of the shorter stacks in the field. That has all changed now. Lee informed us that he’d secured a double with kings against jacks in a pot that moved him up to around 60,000.

Just now he won another pot in the last hand of Level 10. This one played out through to the river in a heads up situation versus Song Yang. Lee opened the action from under the gun and Yang defended his big blind.

Yang checked the flop and Lee continued for 2,000. Yang upped it to 6,000 and Lee thought before making the call. On the 4♣ turn both players checked and the dealer laid an 8♣ on the river.

Yang opted to lead, putting 8,500 over the line. Lee raised it to 20,000 and his opponent went into the tank. After a couple of minutes another player at the table called clock and the floor was brought in. Yang folded before the minute was up and Lee showed J♦10♦ for the bluff. Former Red Dragon Champion Yoshitaka Okawa has had a very productive Day 1 so far. The trophy holder has almost hit six figures with 98,000 chips in play. Hailing from Japan, Okawa is also sat on the left of Celina Lin, so it will be interesting to see if the two champions lock horns.

Flight 1B has another two hours left on the clock before the survivors bag their chips ahead of Day 2 tomorrow.

It is the third and final break of the day. Players will return in ten minutes.

Michael Soyza, Wilson Lim and Sparrow Cheung are just some of the bigger names that have not been able to survive the day. With the last few levels coming up after the next break, the blinds will start to pressure the smaller stacks and we expect the rate of eliminations to increase exponentially. 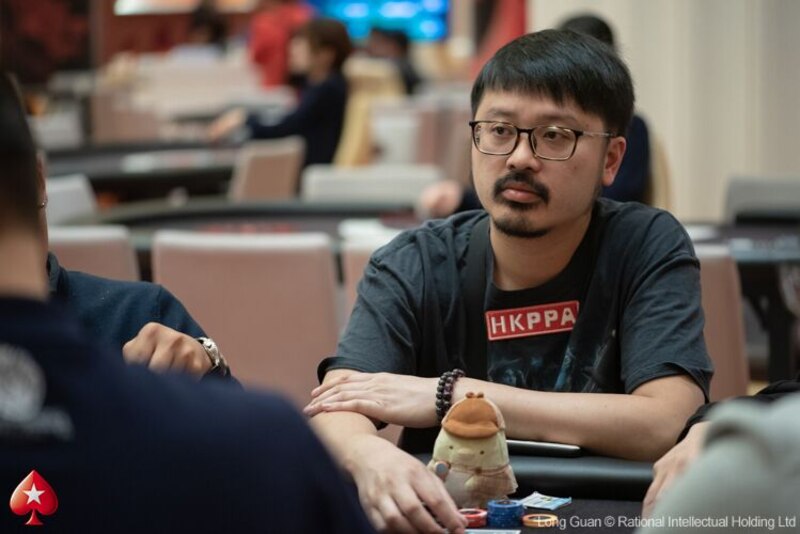 Celina’s stack has dropped from her peak (she told us she had 80,000 at one point). The latest loss was in a pot against Tsz Fai Tong. The board read 4♠J♣10♠K♥3♠ and both players opted to check the last street.

Wilson Lim, APPT Manila 2018 Champion is in the house. He has dropped to 9,600 though and will need to pick up some chips to stay in.

Red Dragon Champion, Alvan Zheng, was recently spotted in the field. Zheng took down the Macau Poker Cup Main Event earlier this year for $390,631. He was unable to get off the mark today though and it has been confimed that he has busted.

Number of entries and final prizepool figures will follow as soon as they have been confirmed.

It’s the second break of the day and there are just ten more minutes of late registration left.

Action was on the Q♣A♠J♠ flop with two players in the hand. Runner-up in the Baby Dragon Dong Chen had position on Wenlong Jin. Jin bet 2,100 on the flop and Chen called. On to the turn and it came the 6♠. It was a barrel from Jin, making it a pricey 7,100 but Chen was going nowhere.

The final card was the 3♥ and Jin opted to check the last street. When Chen checked it back, they turned their cards on their backs. Xuming Qi has almost tripled his chip stack in the first few hours of play. The Chinese professional has already amassed 57,300, which is a long way off the 25,000 average. 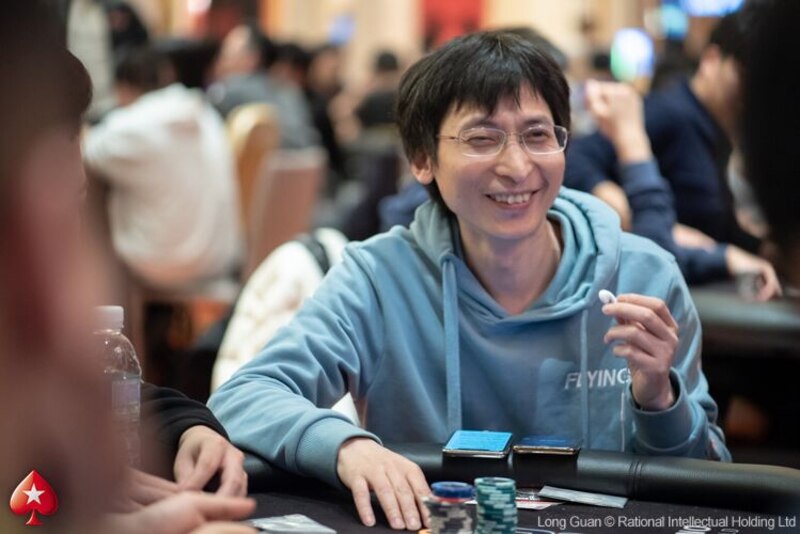 We can’t bring you the details unfortunately but Xixiang Luo has been spotted near the door so has presumably had an early exit in the Main Event. Following on from his incredible run in the High Roller two days ago, Yin Gui Li is taking a stab at the Main Event. Hedge fund manager by day, poker player by night, Li took down the crown and ₩285,010,000 (~US$257,500) in the process for his best score to date. Can he make it two-for-two?

The field has increased to 224, with 205 remaining at the last count. There is still over an hour for any hopefuls to get stuck in.

Tae Hoon Han just won a small pot against Dong Chen on a 2♠5♥4♠7♣6♥ board. On the turn, Chen check-called Han’s 500 bet but then both players checked the river. 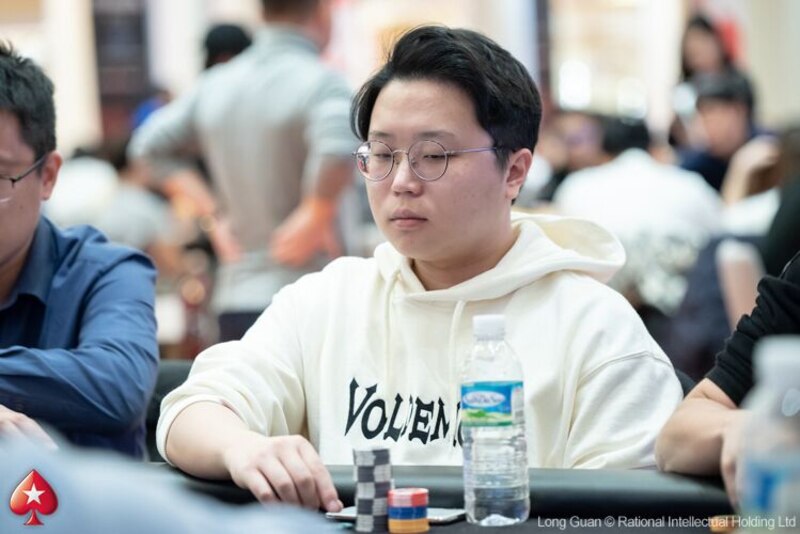 Seats are occupied once more and Level 4 sees the introduction of the running ante.

It’s the first break of the day. See you back here in ten minutes.

It seems like almost every other player in the field is established within the world of poker. Michael Soyza, Xixiang Luo, Yuan Li and Jack Wu have all joined the fray.

Soyza has been having an incredible Red Dragon series so far with two final table results, totalling more than $500,000 in prize money. With a second and a third place finish, will he be able to go one step further in the Main Event?

Luo has a slew of impresive results that has put him eighth on China’s all time money list with almost $1.5 million in winnings. He has been joined by Yuan Li, who trails Luo in 10th place, with more than $1.3 million.

Former Asia Player of the Year Jack Wu, is also in contention. With such a strong field, there are sure to be some exciting action to report on. Watch this space. 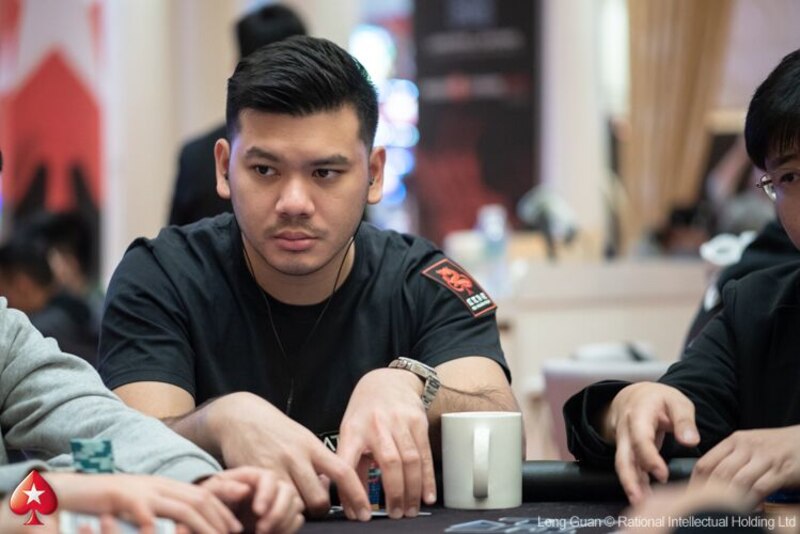 Celina Lin has been spotted at the far end of the room. The Team PokerStars Pro has amassed $987,360 in her career, which puts her just inside the top 20 on China’s all-time money list. Lin is also one of only two people to have two Red Dragon titles (the other is Tom Alner) and will be looking for her third, which would set a new record. 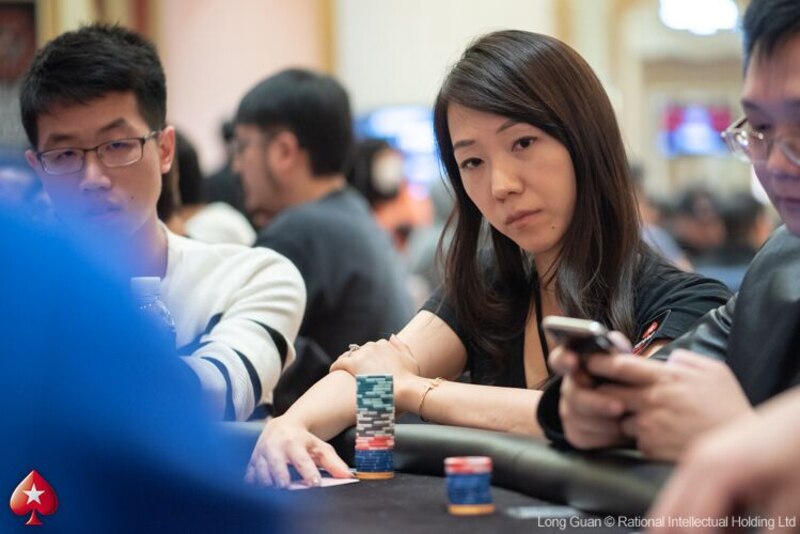 We needed 500 runners across both flights in order to hit the ₩1,000,000,000 guarantee and it only took one level of play today for that to happen. Going into the second level of the day, there are 153 entrants, add that to the 376 from yesterday and the running total is now 529. The final prizepool will be confirmed after late registration has closed. James Won Lee and Dong Chen have both been spotted. Lee won the Baby Dragon event a few days ago is here. So is Dong Chen, who took 2nd place in the same event. It will be interesting to see if either of them be able to replicate their success in the Main Event.

There are 110 players in the field so far, with late registration open until the end of Level 6 (around 10:20pm).

Cards are in the air for Day 1B of the Jeju Red Dragon 2018: Main Event and that means eight hours of live updates are coming your way. 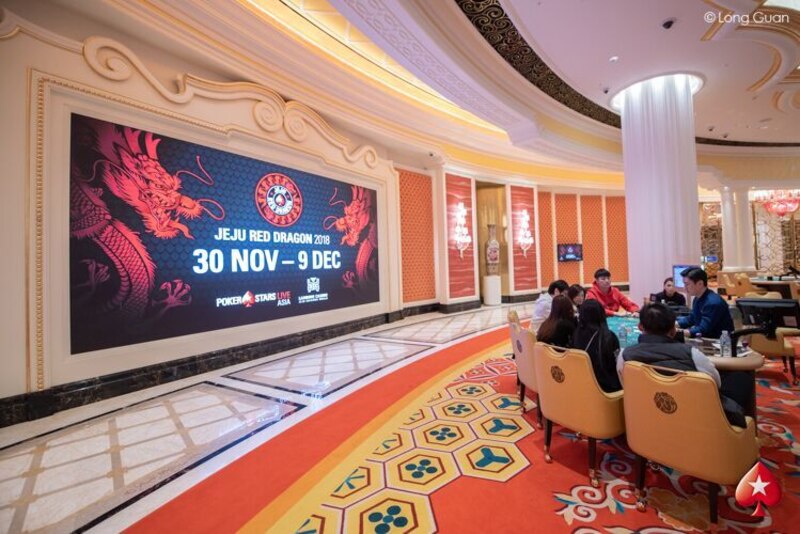 Day 1A yesterday saw 376 runners take part and of those, 141 made it through to Day 2 tomorrow. Hao Qi Xie was the player who made the most headway, finishing the day with 218,000, which was 90,000 more than his closest rival Chun Kong Kwok.

Today’s live updates will start from the moment cards are in the air at 6pm and will continue throughout the 12 40-minute levels, wrapping up when the tournament does at around 2:30am. As with yesterday, registration closes at the end of Level 6, which will be around 10:20pm.

With 20,000 starting chips, what remains to be seen is if any challengers today can best Hao Qi Xie’ impressive run and overtake him for the chip lead ahead of Day 2. We will keep you posted with details of that plus other highlights throughout the day.

For more details on all that happened yesterday, please click here for Day 1A’s wrap and live updates.