Here we are at the Casino Arizona / Talking Stick Resort stop on the Moneymaker PSPC Tour, and everything is going swimmingly. In fact, it’s going pretty damn fast and the lady at the payout desk doesn’t get a moment to breathe before the next bust-out of the 90 folks getting paid happens. So they get down to 13 people left in the tournament, and somebody asks, “What if we just chop it 13 ways? We’ll each get a bit more than $2k.” There is a general nodding of heads, with a couple of exceptions – one of whom is the chip leader. The path to a Platinum Pass goes directly through this stack.

But Chris Moneymaker is not one to mess up a deal – he just wants to make sure he gets full equity. “How about y’all give me… um…. third place money? Yeah, third place money and then you can chop up the rest.” Somewhat to his surprise, “… they snap-accepted.”

But then there was the problem of his chips. 2.1 million of them, to be exact – about 23% of the chips in play. Chris very correctly and graciously said that he didn’t want to be playing king maker – doubling one person up while busting another. So, as we did in Baltimore, we removed him (and his stack) from the tournament. They also had to deal with one other hold-out; we’ll get around to that.

Not too long after that, Turkish native and now Phoenix resident Furkan Beg started scooping up chips like Chris had been doing earlier. In what seemed like a matter of minutes, he decimated the remaining field, capping it off with an unassisted double play with KK vs. QQ vs. 44. He flopped a set on an all-heart board, and faded the fourth one (the queens held a heart). It seemed to us on the rail that he was so pumped about the set, he didn’t realize that the queens had flopped serious equity. But it was all theoretical probability stuff, and when that dust cleared he had virtually all the chips. Within just a few hands he closed the deal, finishing off his heads-up opponent with AT versus KJ on a completely unrelated board.

Then we made him tell us his story…

Oh, the other hold-out in the 13-way deal? Yeah, it was Furkan himself. Version 1.0 of the deal was an even chop. Version 2.0 was Moneymaker getting 3rd place money and the rest being chopped evenly. But Furkan was having none of it. He wanted an extra $700 or so. Ultimately the short stacks (and Chris) volunteered to cough up $100 each so he got what he wanted. Somewhat weirdly, at the time, Furkan was third in chips; Chris had the most and the guy on Furkan’s immediate right was second. But that fellow seemed comfortable with the original arrangement. Who are we to question another’s utility?

We’ll have an interesting pair of perspectives on the deal from Chris and Furkan – stand by. 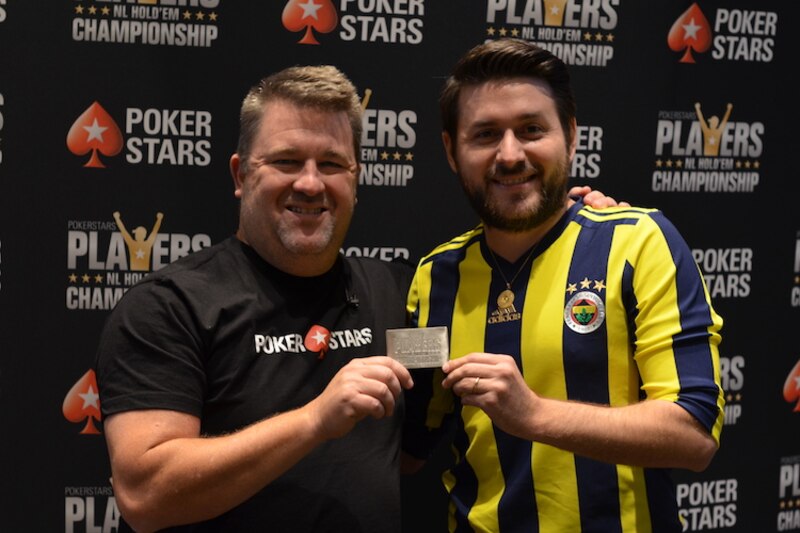 Extra points if you recognize the football/soccer team jersey

Now we load all this stuff into the tour bus (okay, we’re lying – there’s no tour bus) and head to WinStar. They’ve already completed Day 1a and we’ll arrive just in time for Day 1b. Furkan Beg will be home celebrating with his wife and their 11-month-old son, but Chris Moneymaker will be rolling into Thackerville, Oklahoma with a nicely plumped up bankroll, for winning a poker tournament he wasn’t allowed to win.