I’ve been to a lot of poker tournaments over the years. There’s always some sort of entertainment for the players, but last night I took in a spectacle unique among my tournament experiences.

FOLLOW ALL THE ACTION FROM THE PSPC TOURNAMENT FLOOR

The Atlantis Theatre was opened up to Platinum Pass winners and PokerStars players to watch a comedy show from four poker players who also happen to sling jokes. Like the PSPC itself, there was a range of experience represented in the show’s four performers. Joe Stapleton, best known as the Norman Chad to James Hartigan’s Lon McEachern, did double duty as the host for the evening’s festivities and as the feature comic. It’s obvious that Stapes works on his craft with diligence. He turned the crowd to his side early when he handled a heckler in the crowd with ease. Ben Ludlow, who lives in Las Vegas, opened the show with a five-minute set. He’s only been doing stand-up for three months but you wouldn’t have known it from the crowd’s reaction. Putting together a tight five is a lot tougher than it sounds to the uninitiated and Ludlow’s done a solid job in his short time on the stage. Professional comic and poker player Clayton Fletcher — he of the 28th-place finish in last year’s WSOP Main Event — was next on the bill. Fletcher, the son of a jazz musician father and a poker player mother, has been at both of his games for many years at this point and it showed. The laughter started immediately and didn’t relent for 15 minutes. And memorably he had the perfect rejoinder when the heckler from the beginning of the show tried to throw him off with another “YOU SUCK!”: “It’s always the people who don’t have the courage to get up here and do what I do.” The entire crowd — minus, one would assume, the heckler — roared their agreement. 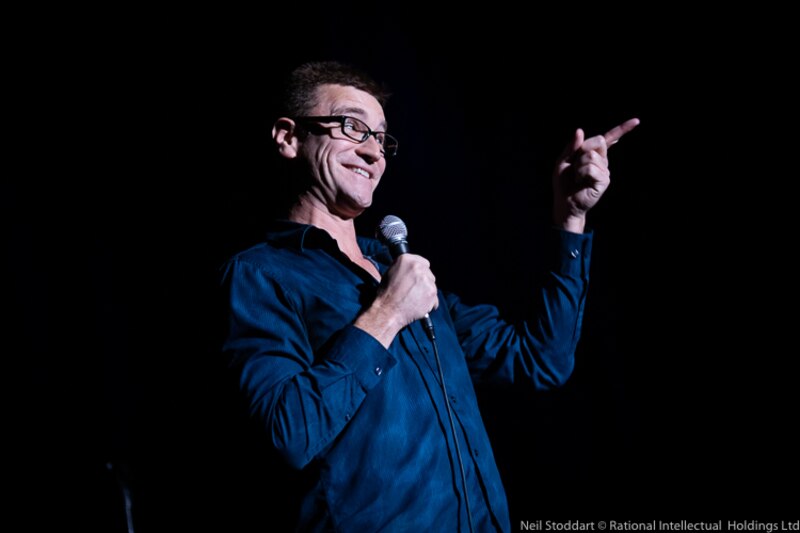 And then there was our headliner, Norm Macdonald, a true legend of comedy. It would be unfair to both you and him if I were to try to sum him up, because any words I use will fall short. All I know is that multiple times during his performance I couldn’t help but think how lucky I was to be watching a Norm Macdonald set. I doubt I was alone in that. The one, the only, Norm Macdonald

Even with so many good comics on the bill, though, the best part of the show was the crowd. Poker players are necessarily at each other’s throats when they’re at the tables, but last night the theater was filled with high rollers, grinding pros, and Platinum Pass winners alike, the differences between them erased by the dark of the room and the rolling waves of laughter.

There are whispers of this perhaps becoming a more regular thing and I, for one, look forward to that possibility.