The World Cup’s most unlikely moments

With the group stages just around the corner, 32 teams from across the globe are preparing to fight for the biggest prize in football.

Actually, make that the second biggest.

To celebrate World Cup 2018 in Russia, we’ve launched the Stars £100 Million Challenge, a free-to-play game offering one of the biggest prizes in sports betting history.

The challenge? Simply predict the winner of every match at the World Cup. Not the exact scoreline, just a win, lose or draw for all 64 matches, from the group stages all the way to the final in Moscow. If nobody strikes the jackpot there are also prizes for players who get close, so it’s all to play for.

To put the epic reward into perspective, the actual winner of the World Cup 2018 will receive £28 million from FIFA, less than a third of what you could win by taking part in the Stars £100 Million Challenge.

The odds are stacked against you, but unlikely things can happen…

The history of the World Cup is littered with major upsets, giant killings and freak results. It’s one reason the tournament is always engaging from start to finish.

One of the greatest of those upsets took place, fittingly, in the dreams-come-true city of Middlesbrough, which hosted a match between Italy and North Korea in 1966 — the year of England’s only World Cup triumph.

North Korea, playing in their first ever finals, toppled Italy with a remarkable 1-0 victory.

Besides sending the North Koreans through to the next round, the match had other important consequences: goalscorer Pak Doo-ik, an army corporal in his non-football hours, was promoted to sergeant after the tournament.

Comparable to North Korea’s achievement was that of North African underdogs Algeria, who briefly lit up the 1982 World Cup in Spain.

Taking on the might of West Germany in the first game of the group, the unknown Algerians outplayed a complacent German side, winning 2-1 in a match that could have ended with an even greater margin of victory.

Sadly, Algeria exited the tournament in frustrating circumstances: Germany and Austria, facing each other in their final group match, both decided to time-waste for the majority of the game, knowing a 1-0 German victory would send them both through.

The game prompted outrage from viewers around the world, but Algeria’s heroics would never be forgotten.

Nor would those of lovable Cameroon, whose exploits at the 1990 World Cup in Italy won them numerous admirers.

Their finest achievement? Defeating Argentina on the opening day of the tournament, a François Omam-Biyik goal earning the Indomitable Lions a 1-0 win.

That 1-0 Cameroon victory was a shocking result, but the game also contained a few bonus surprises.

Desperate to hang on to their lead, the Cameroonians went to extreme lengths to keep the skillful Argentines at bay.

Cue Benjamin Massing, with his side already down to 10 men, carrying out perhaps the finest “tackle” in the history of the World Cup.

He was, quite understandably, shown the red card, but nine-man Cameroon held on to beat Argentina, a feat that makes the Stars £100M Challenge seem relatively straightforward in comparison.

Yet Massing’s legendary challenge wasn’t even the most unusual World Cup moment involving an African defender.

That honour surely goes to Zaire’s Mwepu Ilunga, who, in his team’s final group match against Brazil, inexplicably booted a free kick — a Brazil free kick, that is — over the half-way line.

Though many suspected that Ilunga simply didn’t know the rules, the defender later explained his motivations: notorious Zaire president Joseph Mobutu had threatened severe consequences if the players suffered a heavy defeat.

Ilunga probably deserved a yellow for that legendary hoof, but referees in other World Cups have made more controversial decisions.

Participating in their first and only World Cup in 1982, minnows Kuwait faced France. 3-1 down, they then appeared to concede a fourth, but claimed to have been deceived by a loud whistle from the crowd in the buildup to the goal.

Sheikh Fahad Al-Ahmed Al-Jaber Al-Sabah, brother of the Kuwaiti Emir and president of the country’s Football Association, was furious that the goal had been allowed to stand and called the Kuwait players off the pitch in protest.

The angry Skeikh then confronted referee Myroslav Stupar, who, to the incredulity of the French, went back on his decision and disallowed the goal.

Four-time semi-finalists Sweden have also been on the receiving end of some generous officialdom. In 1978, the Europeans narrowly avoided defeat to Brazil when Welsh referee Clive Thomas blew the final whistle just as Zico was about to head in Brazil’s winner.

The Brazilians, it’s fair to say, were not happy.

The World Cup has produced some shocking matches and some utterly daft moments. It has also left many a bookmaker red in the face… and short in the pocket.

In the weeks leading up to the 2010 World Cup, the Netherlands were outside contenders at odds of around 12/1. Spain, Brazil and Argentina were all tipped for success, while Italy went into the tournament as reigning champions.

The Netherlands would lose the final to Spain, but midfielder Wesley Sneijder finished the competition as joint top scorer. His pre-tournament chances of doing so? 150/1, after the Dutchman scored a grand total of zero goals in qualifying.

And spare a thought for the Swedish bookmaker that offered odds of 175/1 on Luis Suarez biting a player at the 2014 World Cup.

Come Uruguay’s face-off with Italy, the notorious forward chomped a big hole in the bookie’s bank balance, with one winner scooping around £2,000 on the bet. 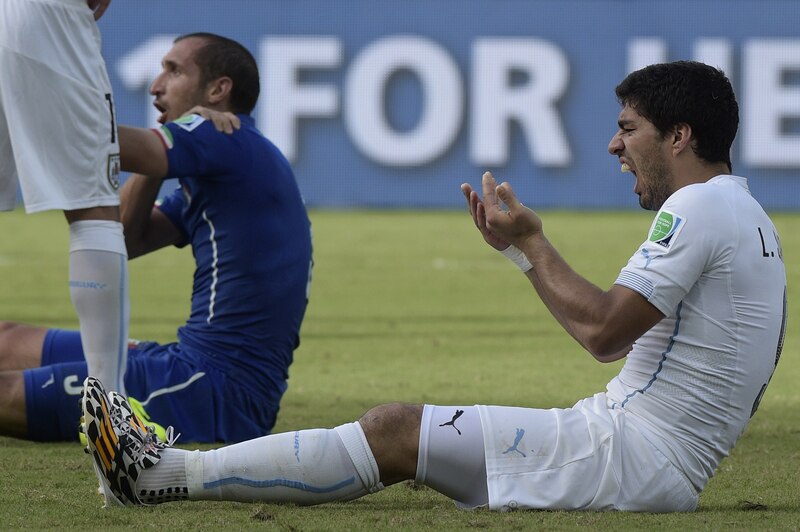 Luis Suarez digests what he has just done

Other World Cup superstars have defied the numbers in other ways. Cameroon’s Roger Milla and Colombia’s Faryd Mondragón, for example, played in World Cups aged 42 and 43, respectively. Milla even grabbed a goal against Russia, making him the competition’s oldest scorer to date.

But that pair could be made to look like spring chickens this summer, as Egyptian goalkeeper Essam El-Hadary looks set to start aged 45 years old.

If that doesn’t say “anything’s possible” ahead of the Stars £100 Million Challenge, what does?