Singapore’s Wilson Lim was the winner of Asia Pacific Poker Tour Manila Main Event taking out the ₱12,970,000 top prize, trophy, title and a PSPC Platinum Pass worth an additional USD $30,000 for the PokerStars Players No Limit Hold’em Championship in the Bahamas in January 2019. He staved off 1363 opponents to be the sole survivor here at City of Dreams in Manila. 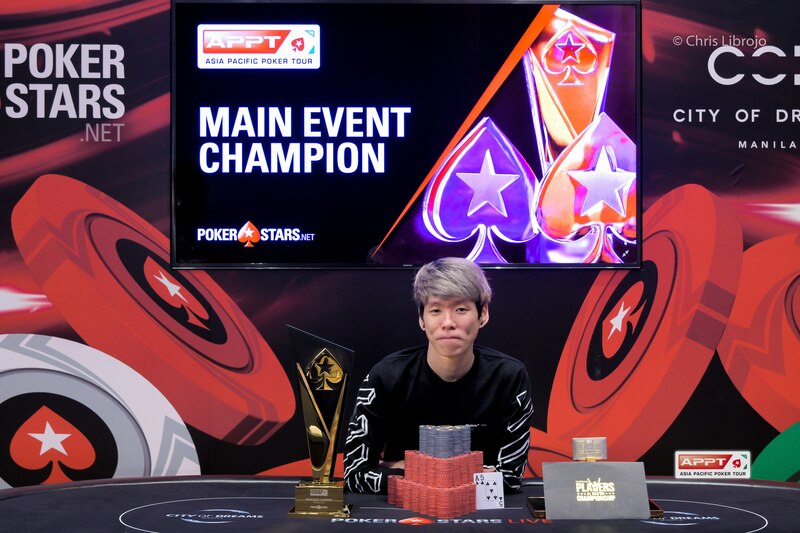 Lim, a 29 year old poker pro, lived the ‘chip and a chair’ experience today. He seemed destined to win. At one stage, when when we got down to two tables he literally didn’t have enough in front of him to make the big blind. He survived multiple shoves (winning so many that players around him were telling each other to avoid getting into a stash with him altogether). He then navigated a short stack for hours and made it through the gruelling six hours at the final table to get heads-up. Even here Lim was up against it as China’s Yuan Chao Li was two to one chip leader. Yet again he showed his prowess, calling a bluff and taking a monster pot from Li quite early on in the battle and swinging the momentum his way.

Lim spoke to us about his experience today: ‘ I told myself, ok, since I built this stack back up from 70k – less than a big blind – I must actually treasure the amount I have, which was the amount that I brought to the final table…I could not actually bust people as I was the short stack so had to keep waiting for some players to bust out. If I had the chip lead, then I would have done what you are supposed to do and I would play more aggressively and play my preferred style, but I didn’t so did not have all that many options.

At first I told myself that anything better than ninth is good. Once we started the final table, as I started to build up some momentum I thought it was actually possible to win starting from less than one big blind. It was a good experience for me, because usually in that spot a lot of players would have given up… It’s all about mind-set…’ As mentioned above the final table played out over a whopping six hours. And that isn’t including heads-up.

Lim was deadly here. A warrior. Eliminating four players off his own bat.

Hudson Wong (Malaysia) was the unluckiest man in Manila. He shoved his stack, ran into Sam Welbourne’s (UK) pocket 7’s and bubbled the final table.

Daesoon Kang (Korea) was eliminated in 7th place – PHP1,400,000, taken out after shoving his stack against eventual champion Wilson Lim.

Sam Welbourne (UK) went out in 4th place – PHP3,438,000 – the Brit was chip leader for a large portion of the epic final table, but shipped all his chips to Yuan Chao Li in an earlier hand and then busted to him not long after. These two did battle on numerous occasions throughout the final table.

3rd place went to Bin Zhang (China) – PHP4,745,000. The third and not final man to be busted by eventual crown winner Wilson Lim.

Runner-up Yuan Chao Lin – PHP7,960,000 went into the heads-up battle as a clear leader. With a more than a two to one chip advantage at the get go, but he too fell prey to the iron will of Lim. They went to war for more than two hours after spending near 40 minutes before that discussing and not agreeing on a chop. Li made a bold play about a half hour in, attempting a huge bluff on the river of a hand, pushing 8M into an already mammoth pot. Lim insta-called him, taking it down for 34M in chips and Li never recovered.

It seemed fate wouldn’t have it any other way.

6:05am Wilson Lim takes the crown!

Wilson Lim (Singapore), who earlier today didn’t have enough chips in front of him to pay his big blind is now the APPT Manila Main Event champion. HE takes home PHP12,970,000 and the Platinium Pass valued at US$30,000

The final hand went down with Lim betting 1.2M from the button. Yuan Chao Li (China) moved all-in and Lim insta-called showing A♣ – 5♣. Li flipped up Q♦ – 7♣. The shouts from both support teams were deafening. The last board of the tournament ran out J♠ – J♣ – 2♥ – 8♣ – 9♣. Ace-high being enough to hand Lim the Main Event crown for 2018. Runner-up Li was gallant in defeat, being chip leader for much of the final day. There has been a 40min delay as a deal was discussed in earnest. An agreement couldn’t be reached. So we play. Yuan Chao Li (China) is dominating the table with three players remaining. He has more than double the chip count of both his opponents individually and is using it to push them around. 3:26am Welbourne ships most of his chips to Li

Yuan Chao Li (China) now has over 20M in chips, winning an enormous pot against Sam Welbourne (UK) with a set of queens. These two have been battling it out all night long, but that particular hand has left Welbourne crippled. 2:30am Wilson Lim keeps on keeping on

Wilson Lim (Singapore) has been the man of steel today. Short stacked and fighting on no matter what. Bin Zhang (China) bet 650k in the cut-off only to have Sam Welbourne in the big blind (UK) re-raise to 1.6M. Lim went all in over the top and chased both players away picking up a nice 2M in the process. 1:36am Welbourne bluffs a monster pot

The biggest hand of the final table just went down before the break. Yuan Chow Li (China) opened under the gun for 500k. Sam Welbourne raised to 1.42M in the big blind. Li called it. Already a massive pay-off here. The dealer put down 9♠ – A♥ – K♣. Welbourne checked and so did Li. The turn came out a 7♣. Welbourne bet at it for 925k. Li agreed to it and we were on fifth street. A brick 2♦. Welbourne said all-in, leaving Li with an enormous decision. He took his full allotment, Welbourne eventually calling the clock on him. As the time ran down Welbourne said ‘You’ll never see the cards unless you make the call’. Li folded and Welbourne sliced Q♠ – 8♣ into the table. A momumental bluff taking down a pot of equal measure. 5M in chips shipped to Welbourne. The first casualty is Jun Zhou (China). Kenny Shih’s (US) pockets 9’s enough to send him to the rail. His A♠ – 4♥ not holding up under the pressure. Very little going on here. Mostly raises of two and half times the minimum followed by folds. I’ll let you know when some action occurs. 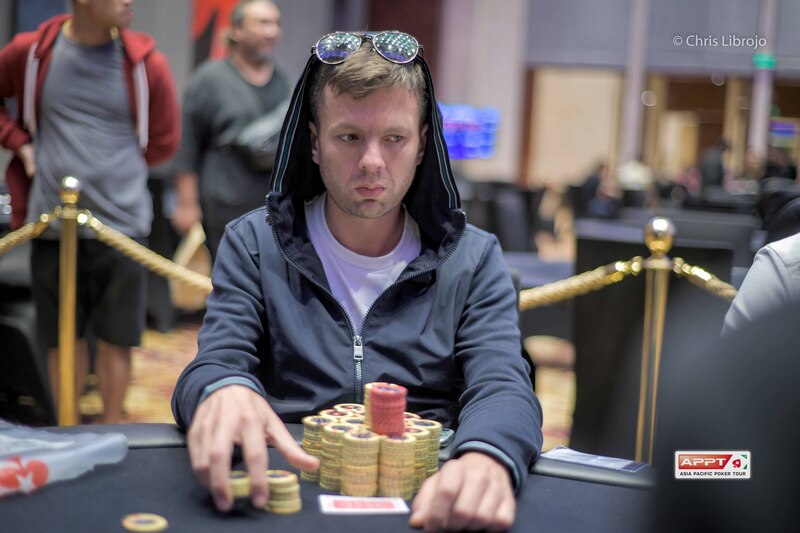 Very steady poker being played. Sam Welbourne (UK) raised 330k from the button and Yuan Chao LI (China) called from the big blind. The flop showed up as 2♣ – K♠ – 8♥. Li checked and Welbourne went again for 215k. Li called it. A 2♦ on the turn gave out a double check and the river was a 4♣. Li checked once again and Welbourne made a move of 425k. Li re-raised to 1M. Welbourne threw his hand away.

Very cautious play occurring on both tables and players attempt to avoid bubbling the final table.

Intense battles are happening on both tables as play five handed looking to get to the last nine. Kenny Shih (US) bet 130k from the button only to have Sam Welbourne in the big blind (UK) re-raise to 560k. Shih considered then shoved. Welbourne wilted. Nobody wants to bubble the final table.

We lose another, I Cheng Lin (Taiwan) goes home in 11th place. Victim to Yuan Chao Li (China), who just keeps getting richer. Quick re-arrange to even up table numbers.

Short stack Wilfredo Abola (Phillipines) pushed blind, Hudson Wong called it with 9♦ – 5♦. Abola showed 8♦ – 2♣ and the board came out with zero help fro him. Abola hits the rail.

Hudson Wong (Malaysia) is definitley the most animated player left in the tournament. He is constantly trying to engage his opponents in chatter. He bet 220k into I Cheng Lin’s (Taiwan) big blind and Lin called. A flop of 2♠ – 10♥ – 4♥ came out. Lin checked and Wong bet another 220k. Lin folded. Strategy or personality…time will tell. Bin Zhang (China) just took down a three-way all-in with bullets and scooped near 7M in chips. Yvo Molin (Netherlands) was railed in the madness. Daesoon Kang never gives much away

Kenny Shih (Taiwan) raised to 150k and Wilson Lim (Singapore) on the button called. Yvo Molin (Netherlands) decided it was time and pushed his 930k stack. Shih wanted none of it. Lim put on think music. A couple of tracks worth. He seemed very close to a call, but eventually laid it down. 4:40pm Busts all over the place

Zebin Sun (China), Tamon Nakamura (Japan) and Siyoung Lee (Korea) are all on the rail now. Getting to the business end now. Jian Hui Giam (Singapore) bet out 90k and Sebastian Wong (Singapore) dug it. The flop was Q♥ – 3♥ – K♦. Giam bet 110k and Wong called. The turn laid down was a 4♠. Giam checked, Wong pounced, firing 170k into the pot. Giam couldn’t get way and made the call. A big pot got bigger when the river came out a J♠ and Giam bet 750k. Wong went all-in over the top making it 890k more for Giam to call…which he did. Giam showed 10♦ – 9♦, making the low end of the straight. Wong threw down A♣ – 10♣, the high end. Wong pounded the table pumped with the win. Giam survived it, about 500k left. Sebastian Wong taking back his overnight chip leader throne. 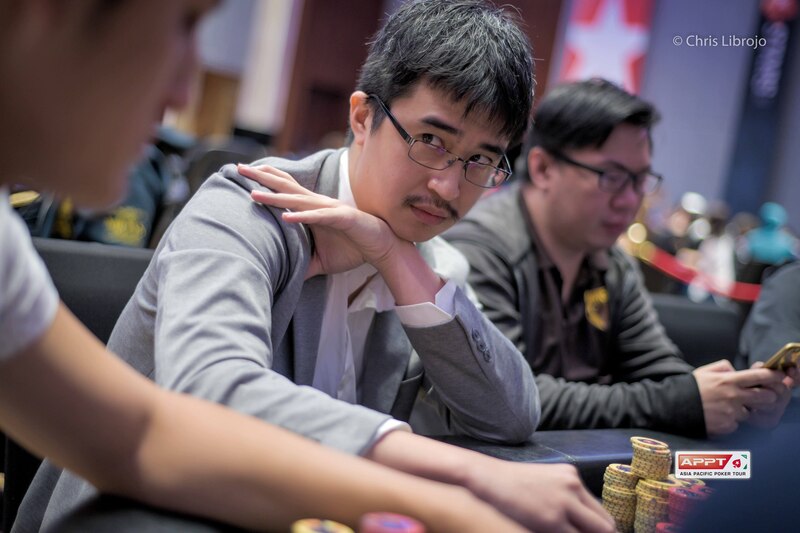 We’re down to three tables. The redraw is happening as I type.

The two big stacks are Hudson Wong (Malaysia) and Sam Welbourne (UK), both near 3M in chips. Sebastian Wong (Singapore) started the insanity with a bet of 65k which Jiang Ho Huang (Singapore) called. After the flop the board read 2♦ – 3♥ – 7♥. Wong liked what he saw and fired 95k at it. Huang liked it more and said all-in. Wong called. With Huang’s push and the call the pot was worth around 2M. Significant. Wong showed K♥ – Q♥. Huang took it further showing A♥ – J♥. Wong was dominated. The turn came a A♠ and Huang hit the table in joy. The river didn’t matter. Huang pulls in a massive pot and now sits up amongst the chip leaders. I Cheng Lin (Taiwan) limped in for 60k ahead of Sam Welbourne (UK) who raised it to 175k to go. Folds all round the table bar Lin, who re-raised for 405k. Welbourne tanked for long time, playing with the chips in his hand and taking hard looks at Lin. The bet was good though, Welbourne mucked, Lin takes it down.

Hudson Wong (Malaysia) took his time yesterday sitting on short all day and then striking late to build it up. He finished top ten in the count last night. With a bet a bet of 60k re-raised to 120k by Jiang Ho Huang (Singapore) the small blind, Wong went aggressive and made it 500k to boot. Folds all round. Wong looking formidible with a stack.

1pm Shuffle up and deal

We’re underway on the final day.

Of the 41 players remaining from the 1364 who started the record-breaking APPT Manila Main Event journey Sebastian Wong came out of day 2 the strongest with over 2.3 million in chips and our clear leader. It was a day of tough competition for the 402 competitors as they jostled to fit into the 162 spots that cashed through 11 one hour levels and secure a piece of the PHP65,492,460 and a minimum of PHP124,000. 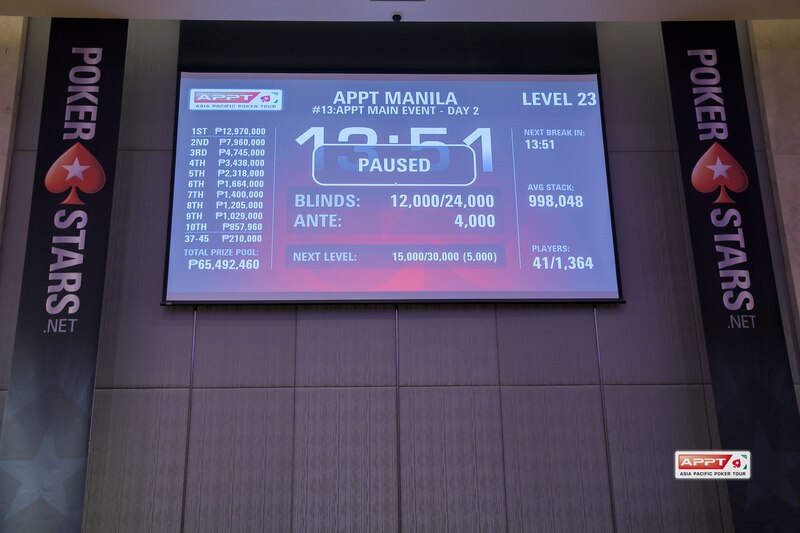 The chip leaderboard finished up as follows:

Day 3 gets underway in just under an hour and it should be a cracker. Tune in then for updates.