Q. In 6+ Hold’em, flushes beat full houses, and in some places trips beat straights. Have the hand rankings for poker always been what they are today?

Short-Stacked Shamus: Good question, George. As new variants like 6+ Hold’em keep proving, poker is an incredibly versatile game capable of handling all sorts of rule changes. However, when it comes to the standard poker hand rankings, that part of the game has remained relatively steady for the last century or so.

That said, before that there were some debates that had to be settled first.

When poker first appeared in the early 1800s — initially as a 20-card game, then eventually using the entire 52-card deck — most (but not all) of the hand ranking list was already in place.

The 1845 American edition of Hoyle’s Games was the first one to include poker. There the hand rankings were presented this way (going from low to high):

Notice anything missing? That’s right — no straights. Nor is there any mention of a straight flush (or a royal flush). A “full hand” is a full house, by the way.

In 1850 Bohn’s New Hand-Book of Games, the entry on poker repeated the same hand rankings (and pretty much everything else) from the American Hoyle, though did add a section about “Draw Poker” explaining how discarding, drawing, and betting worked in five-card draw.

The 1864 American Hoyle edited by William Brisbane Dick expanded the section on “Poker, or Bluff” a little, adding a hand called “straight, sequence, or rotation” to the “Value of the Cards” list. Here’s how that list appears:

Again, notice anything strange? That’s right — the straight comes after two pair before “triplets” or three of a kind. That led to arguments among poker players over the next few decades about whether or not a straight should rank higher than three of a kind.

A reader writing a letter to The New York Tribune in 1875 complained about how in an early set of rules for draw poker the paper had just reprinted, straights were ranked higher than three of a kind. The letter writer tries to cite probabilities to back his argument that “‘threes’ should beat ‘straights,'” but alas for him his math is faulty. 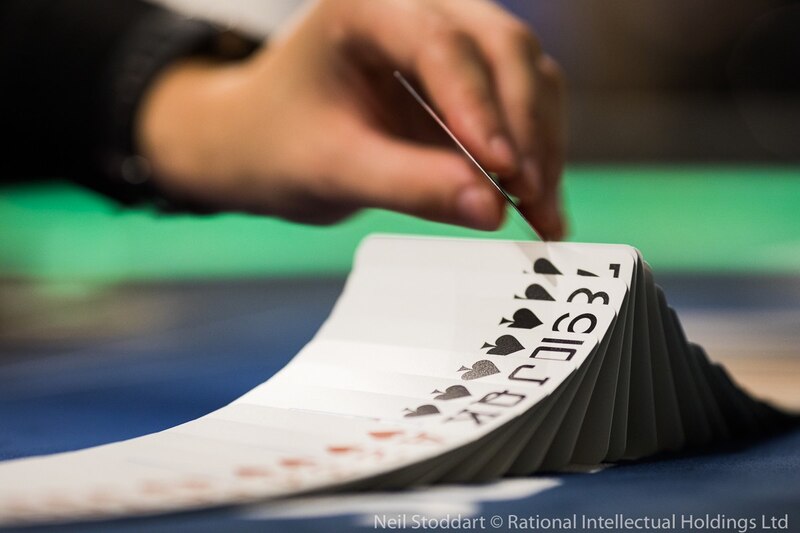 Also worth noting, in the 1864 Hoyle there’s a note explaining how at that time straights weren’t always counted at all. In fact, it sounds like most of the time they were not.

“Straights are not considered in the game,” the disclaimer goes, “although they are played in some localities, and it should be determined whether they are to be admitted at the commencement of the game.”

This little bit of trivia comes up in a humorous way in a 1957 episode of the TV show Maverick, one titled “According to Hoyle.” Playing on a steamboat, Bret Maverick lays down a straight and thinks he’s beaten his opponent’s three nines — until, that is, she pulls out an old edition of Hoyle and reads the rule about declaring straights be admitted before the game!

Straight flushes are also mentioned in the 1864 Hoyle, though in a revised version there’s a note explaining how debates are ongoing over whether or not a straight flush should beat four of a kind, too.

The 1874 edition of the American Hoyle describes the straight flush, although confusingly calls any straight flush a “royal flush.” The hand rankings are missing as well, not helping either as far as the debate over straights beating trips was concerned.

Later editions bring back the list and some even include probability charts to show how the ranking of hands corresponds to the relative chances of their occurrence. For example, the 1911 American Hoyle presents the rankings as follows:

Glad that finally got sorted. Of course, now with 6+ Hold’em the debate over whether or not straights should rank ahead of three of a kind has been renewed, since in that game it is actually more difficult to make three of a kind than a straight.

That said, in 6+ hold’em it’s also actually harder to make no pair (“high card”) than one pair — no shinola! (There’s a mystery for you.)

Have a poker-related mystery you’d like solved? Tweet your questions to @PokerStarsBlog with the hashtag #AskShamus and we’ll put our P.I. (Poker Investigator) on the case.

Play 6+ Hold’em, regular hold’em, or dozens of other poker variants at PokerStars.

Lex Veldhuis: All you need to know about the Twitch superstar

Everything you need to know about Throwables