It was an interesting night on the SCOOP tables for two of Twitch poker’s favourite sons, Jaime Staples and Lex Veldhuis. While neither have yet to have a huge score, Lex was through to three Day Twos in SCOOP events yesterday including the $2,100 High Roller [Medium], with over $200,000 for the winner. 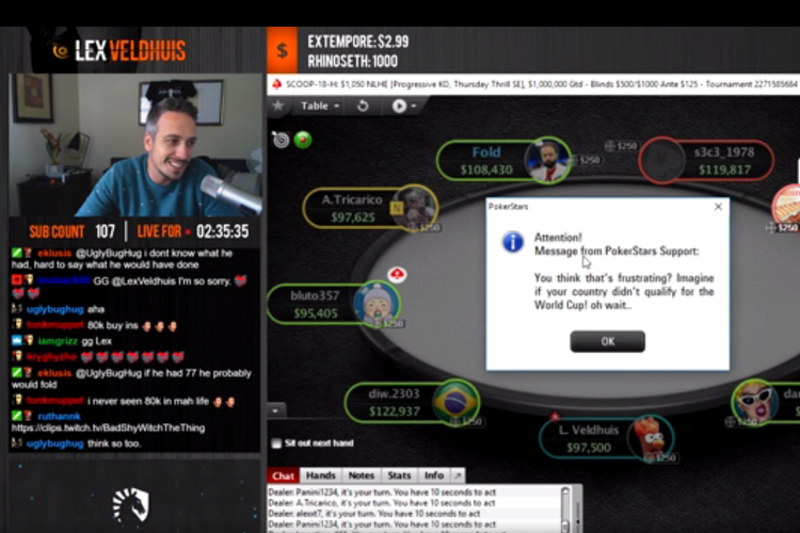 Lex getting trolled by PokerStars

With just 35 players coming back for Day Two and Lex with a ton of chips, the excitement on his Twitch channel was set to super-hype. And then it all went wrong. Lex ran terribly, losing pot after pot before eventually finishing in a disappointing 25th place for $8,359.

As if that wasn’t enough, he was then mercilessly trolled by his very own sponsor – PokerStars. Watch the black comedy unfold for the Dutchman right here:

Today was a nightmare. Ran icecold in all day 2's. Grinded my ass off for 11 hours though and was able to squeek out a day 2 in the $215 6-max. This was the most insane needle after busting the 2k: https://t.co/eSOsoA21C3

Elsewhere, Jaime Staples took time out of his grind to give us a mid-day report on what has been “a crazy day on the felt so far”;

PokerStars Blog has teamed up with Jaime Staples for an amazing value freeroll where we are giving away 25 $109 tournament tickets for use in the SCOOP Main Event [Low], with a guaranteed prizepool of $1,500,000!

To earn a seat into the freeroll, simply make a deposit of at least $10 and use the code ‘JaimeDiaries’. You’ll then be automatically registered for the SCOOP Diaries Freeroll. You can find this by going to the Tourney tab on PokerStars and searching for ‘Diaries’, or by using the tournament ID 2299843641. Good luck!

PokerStars Ontario: All you need to know

WCOOP 2022: Huber wins for Team Pro as Mattsson and Sweeney do the double