SCOOP 2018 Day 5: Crazy for Staples, Trolls for Veldhuis, and News of what could be the most coveted SCOOP title of all

• The biggest results from the day
• Who won what?
• Today’s SCOOP 2018 winners map
• The Unofficial SCOOP STAT Tracker
• Coming up on Friday (and this weekend)

First, news of what could become the most coveted SCOOP title of all

If one thing is certain in tournament poker (putting “rake” to one side for now) it’s that everyone gets knocked out sooner or later.

We’re all sent to the rail earlier than we’d planned, except the winner of course. And amid the gloom, and the recrimination, the only question left is who sent us there?

But that got us thinking. Maybe there’s another question.

Which players are particularly good at dispatching the departed?

And exactly how good are they?

Well, we plan to find out.

Starting next week, we’ll be keeping score of all SCOOP eliminations (including all those that have already struck in week one).

Each day we’ll post the latest standings showing which players are the most lethal in the business.

It may offer some consolation to anyone undone by the most dangerous player in the tournament. Better that than some new guy claiming his first scalp. Although be warned, we’ll be keeping track of that too.

If you’ve played a SCOOP event and knocked someone out, you’ll be on the list. And you can check back each day to see which position you occupy.

And, while details are being finalized, if you top this most deadly of leader boards you’ll win what is the newest, most original, and possibly the most ridiculous title in poker right now:

Official rankings start next Tuesday (with a sneak peek available on Monday).

So, while you might not finish this Series a SCOOP champion, you could still rank as one of the most feared.

And that’s got to be worth obsessing about.

That’s all coming next week. Now to today’s SCOOP update.

We reported on three events overnight, each with a guaranteed of at least $1 million.

In the first, SCOOP 14-L, a $215 8-Max High Roller, jenbizzle, who has previous in SCOOP, was the player to beat, even when up against a field dominated by Brazilians.

There were others too, which you can read about in Al Rash’s report of the final here.

He beat RomeOpro heads-up, denying the Ukrainian what would have been a third SCOOP title inside of a week.

These are the latest SCOOP winners to be used as your inspiration. Now go do that voodoo that you do so well.

For all the latest results from SCOOP go to the SCOOP 2018 homepage.

3. If mapping SCOOP winners had anything at all to do with predicting the winner of Eurovision 2018

The bulk of the winners have come from Europe so far this Series. They’re plotted on the map below, with those in red having won SCOOP-H events. And here’s the same map, with top five Eurovision 2018 rankings based on SCOOP winners. 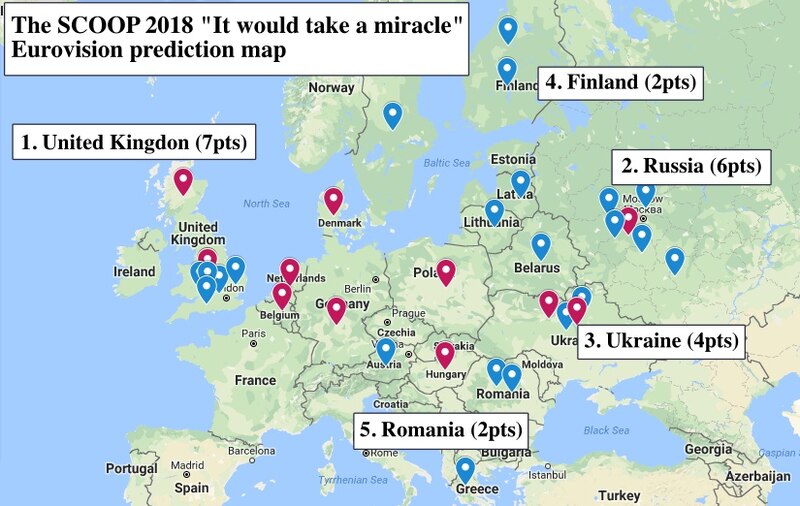 The official SCOOP Stat Tracker (occasionally reliant on the “Make it up, nobody will check” Data System).

And the overall leader board:

5. Coming up on SCOOP on Friday (and this Weekend)

The events highlighted in bold feature guarantees of $1 million. Read reports of these final tables on the blog.

There are 12 more events on Saturday, the highlight being SCOOP 27-H $1,050 NLHE 6-Max Progressive KO. We’ll have a report of that event on the blog shortly after it finishes.

Then on Sunday 15 events begin, starting first thing in the morning. We’ll have reports of three of those events, SCOOPS 30-H, 31-H and 32-H, each featuring a guaranteed prize pool of $1 million.

Find all the details of this year’s series, including the schedule and leader board information, on the SCOOP 2018 homepage.

Lex Veldhuis managed to get himself trolled by PokerStars staff yesterday. It’s hard enough grinding SCOOP without people making fun of the fact your country didn’t reach the world cup, but well, they did it anyway, as you can see below.

Today was a nightmare. Ran icecold in all day 2's. Grinded my ass off for 11 hours though and was able to squeek out a day 2 in the $215 6-max. This was the most insane needle after busting the 2k: https://t.co/eSOsoA21C3

Elsewhere Jaime Staples reported in with his latest video diary, which covers what he called “a crazy day on the felt”.

PokerStars Blog has teamed up with Jaime Staples for a freeroll featuring some amazing value.

Earn a ticket into the freeroll by making a deposit of at least $10 using the code ‘JaimeDiaries’. You’ll then be credited with a ticket you can use to register for the SCOOP Diaries Freeroll on Sunday May 20. Find it by going to the Tourney tab on PokerStars and searching for ‘Diary’.