The hidden truth: What does it mean to have a “poker face”?

“Poker face” is a good example of a phrase used in poker that has entered the common vernacular. Pretty much everybody — whether they play or not — knows that having a poker face means successfully hiding your emotions behind an impassive, unrevealing expression.

Then again, I wonder if the phrase itself might be hiding something.

There’s a popular teen drama that has been on the air throughout the 2010s called Pretty Little Liars. It’s a serialized murder mystery centering upon a group of high school girls based on the bestselling series of novels by Sara Shepard. There has already been one spinoff show, and another is coming — Pretty Little Liars: The Perfectionists — the debut of which arrives next week.

Cosmopolitan‘s Emily Tannenbaum is excited about the new show. She particularly likes the opening to the first episode that has been made available as a kind of teaser to introduce the new setting where the story of another murder mystery will soon be told:

You recognize the tune, of course, the international chart-topper “Poker Face” by Lady Gaga, here being played on a cello. “The song itself is perfect for a series about keeping secrets that literally has liars in the title,” observes Tannenbaum. It certainly does help set an appropriately urgent mood.

But wait a minute. Is that what having a “poker face” refers to? Being a liar? Or does it just refer to hiding something? Or keeping a secret?

Let’s dig beneath the surface a bit and see what we find.

Want to get good? Get a poker face

In his 1875 book Round Games at Cards, British author Henry Jones, writing as “Cavendish,” introduces various poker games and associated terms. Among the “Hints” he provides as general strategy advice, Jones lists how “the possession of a good poker face is an advantage.”

Cavendish goes on to explain what he means by the phrase, namely, that “No one who has any pretensions to good play will betray the value of his hand by gesture, change of countenance, or any other symptom.” Looking to succeed at poker? Don’t let the look on your face give anything away, since if you do “an experienced player will judge from the expression” the value of your hand.

In other words, pretty much from the time people starting writing about poker strategy, not only was it evident from the beginning that hiding information from your opponents was valuable, there was already a shorthand way to describe doing so — get yourself a good poker face!

Poker faces away from the tables

The phrase soon took on a kind of figurative meaning as well, entering everyday conversation to refer to all sorts of blank looks, dispassionate expressions, and deadpan responses.

During the 1920s and ’30s, Helen Wills was the Serena Williams of her era, winning 19 Grand Slam singles titles including eight at Wimbledon. She played with a cool, emotionless style, seeming to ignore both her opponents and the crowd as she won match after match, tournament after tournament.

The famous sportswriter Grantland Rice (who during his career gave lots of athletes nicknames) famously described Wills as “Little Miss Poker Face.” The nickname stuck, a clearly-earned compliment (well, aside from the “Little Miss” part).

In his 1933 experimental play Days Without End (1934), dramatist Eugene O’Neill includes a stage direction in which he assigns to a character “the meaninglessly affable expression which is the American business man’s welcoming poker face.” Seems apt when thinking of the competitive world of business, where information can (and often does) mean money.

In 1943, the novelist Graham Greene wrote a review of Hesketh Pearson’s biography of Sir Arthur Conan Doyle, author of the Sherlock Holmes stories. Greene titled his short essay “The Poker-Face,” and in it he commends Pearson for having uncovered enough about Doyle to bring him to life to the reader — that is, for having done some Sherlock-like detective work and successfully “got behind that poker-face.”

By the way, Maria Konnikova performs similar feats of deduction in her book about Doyle and the Sherlock Holmes stories, Mastermind: How to Think Like Sherlock Holmes — a great read for poker players, even if it isn’t specifically about poker.

Read about another recent instance of Konnikova discussing poker away from the tables: “In Maria we trust: Konnikova talks poker and more at the World Economic Forum.”

In that essay, Greene describes what a “poker face” is in an especially poetic way.

“One has seen that face over a hundred bar counters — the lick of hair over the broad white brow, the heavy moustache with pointed ends, the firm, good-humoured eyes, the man who is a cause of conviviality in other men but knows exactly when the fun should cease,” writes Greene. “He is wearing a dark suit (the jacket has four buttons) and well-polished boots. Could Sherlock Holmes have deduced from this magnificently open appearance anything at all resembling the bizarre truth?”

Games of hide and seek

We could list many more examples of poker faces in politics, sports, business, warfare — you name it. You get the idea. Having a poker face means being unreadable. There might be some “bizarre truth” lurking beneath that “open appearance,” but it’s hard to say for sure, and only the most discerning, perhaps someone with Holmesian-level powers of observation, might be able to figure out what, if anything, is being hidden.

By the time the great photographer Ulvis Alberts titled his well regarded (and much coveted) collection of photographs Poker Face (first published in 1981, with Poker Face 2 following in 2006), his title enjoyed both literal and symbolic meaning, suggesting the photos of the players pictured within held secrets worth studying.

So, too, did anthropologist David Hayano deliberately choose the title for his 1982 study of California poker players — Poker Faces. Such a choice indicated Hayano believed there was something worth investigating in the seemingly inscrutable expressions of players sitting around the poker tables in the California clubs — something more than meets the eye (to employ another cliché).

Aaron Brown’s The Poker Face of Wall Street (2007) describes affinities between the card game and modern finance, showing many parallels between the strategies employed in both realms. There’s also another clever connotation, though, indicating how Brown intends to reveal something hidden about how Wall Street works.

Dan Harrington and Bill Robertie provided for their readers a kind of extreme example of a solid “poker face” in Volume II of Harrington on Cash Games (2008), delivered amid a discussion of tells and how to avoid giving them off at the table. One method they recommend is what they call “The Patrik Antonius Way” — that is, the approach taken by the Finnish pro.

“Antonius’ defense against tells is classically simple,” the authors write. “After he makes an important bet, he just sits at the table, stiff as a board, and stares silently at a fixed point in space.”

His poker face, they judge, “gives a good impression of a catatonic trance,” and after his opponent finally acts, he “reenters his body and rejoins the living.” 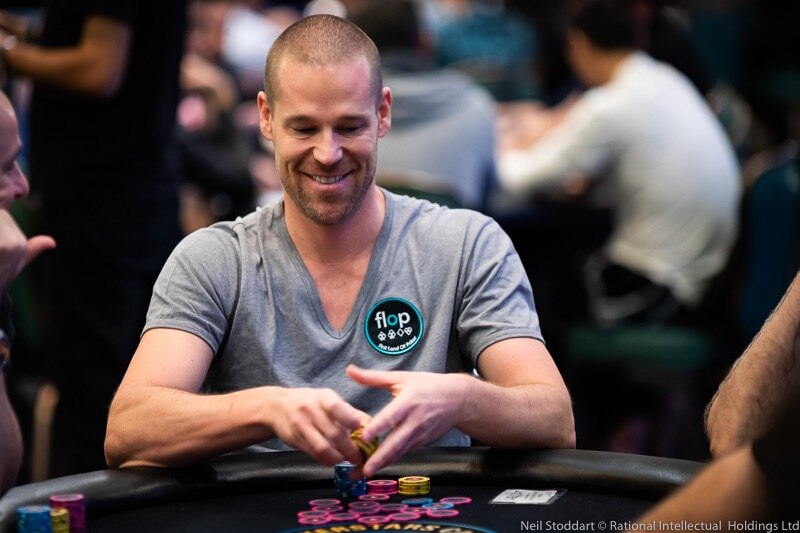 But… wait… you seemed so serious before!

When I hear the phrase “poker face,” that’s the image I usually think of first — a stony-faced poker player whose expression is entirely neutral, not communicating anything. The kind of thing Mike McDermott is trying to pull off in Rounders when Johnny Chan asks him if he had it, and Mike says “I’m sorry John, I don’t remember.”

That is to say, I don’t necessarily make the association between having a poker face and lying that the Cosmo writer makes, although it’s interesting to think how non-poker players might have that instinct. If that is the case, that might suggest something meaningful about how the “mainstream” views poker — as a game that involves telling lies.

Now that I think about, I guess Mike McDermott was lying to Chan. I suppose that’s what Lady Gaga is getting at, too, when boasting about others being unable to read her poker face. “I promise this, promise this,” she sings, implying that with her expression she has intentionally tried to mislead.

After all, obscuring the truth, however it is done, can be called a lie of omission.

That’s how I read it, anyway.

Lex Veldhuis: All you need to know about the Twitch superstar

Everything you need to know about Throwables