If the 80s were the birthing pool for huge franchises and some of the best-loved classic arcade titles, the 90s was the time games got serious. Some of the games released in this decade changed the landscape forever, as first-person shooters were unleashed and developers finally got to take their creations into the third dimension. Join us as we countdown the top 10 video games from the 90s (and another eight that just missed the cut but we couldn’t ignore – call us greedy, we don’t care).

When we first saw Doom we were completely blown away. It might not have been the original first-person shooter – that honour went to id Software’s previous release Wolfenstein 3D – but it was Doom that changed the world. The sci-fi horror shooter is one of the most influential video games of all time and, with the first nine levels given away for free, it was estimated that around 20m gamers battled the hordes of satanic demons, with just a mouse and a keyboard for protection. The single-player experience was incredible but it was support for network multiplayer that made your best mate bring his PC round in his car every evening. 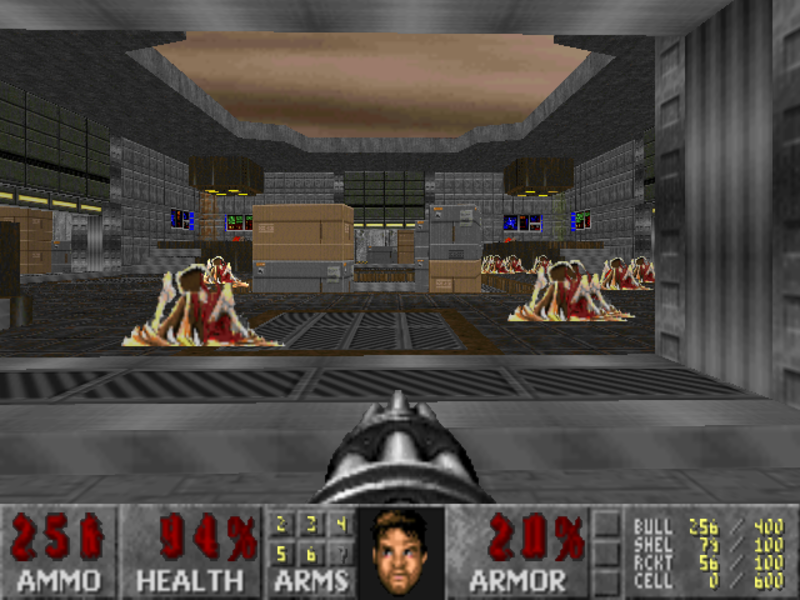 Hadouken! 27 years and still going strong – that’s the legacy of Street Fighter II, and the impact of the 1991 arcade game is still being felt in huge eSports arenas round the world. There had been fighting games before but none so nuanced as SFII. The eight characters were all unique, with their own strengths and weaknesses, and the special moves set it firmly apart from button bashers – getting good at Street Fighter II required skills. Incredibly, the combos that SFII invented were originally a bug, but developers Capcom realised they’d inadvertently stumbled on a goldmine. The techniques and counter-techniques required to master the game pits two minds against each other like no other game ever coded. Ryu from Street Fighter 2, looking like he needs to avoid USADA

Blizzard’s benchmark real-time strategy surpassed its predecessors in the 90s (notably the immensely popular Command & Conquer) after gaining a feverish following in South Korea. Complex leagues were set-up and prize money started swelling, especially with the release of the expansion pack Brood War later in the year. The sequel StarCraft II: Wings of Liberty was released in 2010 and quickly became the richest eSports game and helped to build the Twitch live-streaming platform. Its popularity might be waning now but you can’t talk about competitive gaming without a nod to StarCraft. Even better, you can now download and play the original and the expansion pack Brood War for free from the Blizzard website.

It might seem odd that one of the top ten games of the 90s was also one of the most returned games ever, but Final Fantasy games aren’t for everyone. Japanese RPGs are niche and although this was one of the most approachable, it was still way too much for a lot of people to handle. Fans are obsessive about the game, though. So much so that they demanded the developers do it again, and in 2015 Square Enix announced a full-blown remake. That’s still in the pipeline but you can bet it will cost more than the $45m bill the original racked up. That was a huge amount in 1997 but Final Fantasy VII showed that games will overtake films as a medium one day, with a narrative that made grown-ups cry, and an ambition so epic you could (almost) forgive the overblown combat system.

Another franchise that started in the 90s and Lara Croft has since broken out from the consoles and onto the big screen. She was one of the first strong female leads in a video game, but didn’t escape controversy, with people complaining that she looked like she’d been dressed by a marketing man. Her first outing was in 1996 and it was one of the first games that showed the full wow of an immersive 3D environment. Ask anyone that’s played the game and all they’ll want to talk about is the T-Rex, which induced the same blind panic it would if you’d encountered it in real life. It’s an all-time classic gaming moment in one of the all-time classic games.

Games are supposed to be fun. And we defy anyone to find anything that’s more fun than a multiplayer session of Mario Kart. Sure, the latest FIFA looks amazing and if you’ve got a year to master it, you can reap the rewards. But Mario Kart delivers edge-of-the-seat thrills to anyone with a spare five minutes. The original was released in 1992 and new versions are still coming out today, with improved graphics and extra power-ups. But strip away all of these and the core gameplay is the same now as it was over 25 years age. Brilliant and timeless. 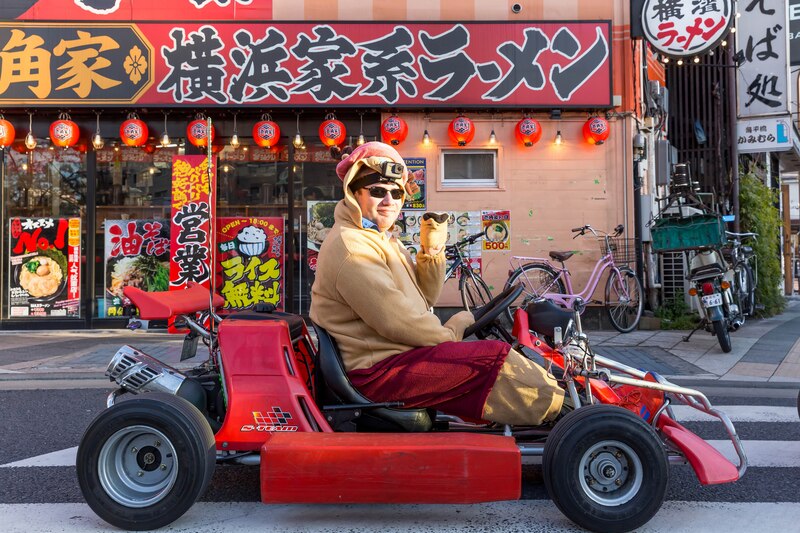 Mario Kart’s legacy lives on to the extent that you can now drive go-karts inspired by the game around Tokyo! Credit: Marco Verch, flickr.com

The greatest game of all time? Mario and Zelda fanboys will be willing to fight anyone that says this, but in the world of the first-person shooter there’s only one boss. It’s the sequel that people talk about most, but by focusing on story and creating a level of immersion that had never been experienced before, the original Half-Life took gamers on an unforgettable journey. Without Half-Life we might not have had Steam and we certainly wouldn’t have had Counter-Strike. That game, that’s now one of the most popular in the eSports arena, was originally a free mod for Half-Life.

Video games used to be for geeks. And if you weren’t a geek you’d play them when no-one was watching. Well the geeks came out of their shells in the 90s and Wipeout did more to make games cool than any other. A futuristic racing game that was one of the launch titles for the PlayStation, the dev team enlisted Brit design firm The Designer’s Republic to make Wipeout stand out. And stand out it did. Everything from the adverts, to the box art, to the interface and the game itself looked fantastic, and then there was the soundtrack… The game was aimed at clubbers and tracks were licensed from Leftfield, The Chemical Brothers and Orbital to complete what felt at times like a hallucinatory out-of-body racing experience. A real game-changer.

Three FPS games in a single top ten? It’s controversial but Quake has to take its place here, mainly because we can bundle in Quake 3 as well. Quake introduced the world to rocket jumping and took the FPS to new heights by allowing you to look and shoot up and down in a fully 3D environment. Quake 3 was controversial as it did away with the single-player campaign, leaving some reviewers to claim it wasn’t even a game, just an engine. They’re looking silly now. The combination of jump pads, finely balanced weapons and the crazy quad damage meant this was as much fun as you could have with your mates while blowing them to pieces.

Championship Manager is more spreadsheet than game, although if you say that to its loyal fans you’re likely to get a slap. If you’ve not played it, CM is basically a database of football players’ stats. Your job is to create a team and guide it from the bottom to the top, buying, selling and training your players until they’re elite. The reason it’s here, and the reason it’s still going strong today, is its unerring accuracy. Players have been bought and sold in real life on the back of CM stats, which are now used on Sky Sports in the transfer window. Not all games are for geeks. This one was. And still is.

All of these games made a case to be in the top 10… And then get buried here.

The game that proved first-person shooters could have a life outside the PC made full use of the four-player multiplayer capability of the Nintendo 64.

We might get laughed at for not putting these in the top 10 but we’ve already included Zelda in our Best Games of the 80s article. These two show how much games changed in the 90s, with Link to the Past coming in 1991 (it’s still probably the second best Zelda game ever behind Breath of the Wild) and Ocarina of Time showing what was possible in 3D in 1998.

Took Mario from his 2D platforms and unleashed him into a fully 3D world. It’s since been surpassed by Galaxy or Odyssey, but this was a groundbreaking title.

Monumentally important, not just for the Blur/Oasis-like battle between UT and Quake 3 when it was released, but for the Unreal engine that powers so many of today’s AAA games.

Before FIFA and PES got into the battle for realism, Sensi was the real deal if you wanted fast-paced arcade football action. It had no official license, which meant you played with players like the legendary Ryan Goggs.

The super-fast platform franchise began in 1991 but it never reached the heights of Mario. Probably because you played a hedgehog.

Sticking MGS in the bubbling under section is possibly the most controversial decision we’ve made. The stealth-action game could easily have made the top 10 on a different day. Please don’t hold it against us.

You play as elite taskforce S.T.A.R.S. (not that one) as you investigate horrific goings on in Raccoon City. A pretty terrifying experience.