Why are millions of us obsessed with fantasy football? Exclusive Q&A with David ‘Wasting Your Wildcard’ Wardale

The football season has just kicked off and that means a new round of fantasy football for millions of avid fans across the globe – we talk to author David Wardale about his new book Wasting Your Wildcard, which could ensure you’re a Pep and not a Jose.

Over the past few weeks, millions of people around the world have been pouring over spreadsheets and agonising over small details and potential mistakes that could have serious and far-reaching consequences. We’re not talking tax returns here, but something far more important – the start of the new fantasy football season.

Fantasy sports might be big money in the US – poker pro Aaron Jones won $5m back in 2016 – but in the UK it’s all about bragging rights in the FPL, the official Fantasy Premier League. You pick a squad of 15 players with a budget of £100m and send them into battle over the course of a full season. You get one free transfer a week, any more cost valuable points and you can use two wildcards to completely change your squad for free. You can even set up a team on your mobile phone to make life even easier. It’s beautifully simple and fiendishly compelling. And like poker it’s the perfect mix of skill and luck.

You can compete in the main league, with millions of other teams, or set up private mini-tournaments and play against your mates. Read on and get involved, but be warned, we can’t take any responsibility if you get sucked in and your life is turned upside down. Forever.

PokerStars Blog: Fantasy football is huge – for some people it’s bigger than the real-life game… What makes it so compelling?

David Wardale:I guess it’s different for different people but, broadly speaking, it gives us the chance to channel our inner football manager and to quantify our knowledge of the game. Also, it makes otherwise meaningless matches between teams we neither support, nor even like, exciting when we have points riding on them.

How long have you been playing and have you had any success?

Since the mid-1990s. I dabbled in the Daily Telegraph game and then ran a draft version in the newsroom I was working in at the time. That was a nightmare – it was pre-internet, so if you missed Match of the Day, you had to scour newspapers for possible mentions of assists and bookings. I came across FPL in 2004, and the rest is shabby history. ‘Success’ is such a strong word. My best finish was a couple of seasons ago, when I came 8,458th.

Who do you support in real life and how do you think your team will do this season?

Arsenal. I’m (strangely and dangerously optimistic) as Emery has gone out and bought all the players – keeper, centre-half, defensive midfielder – that Wenger was too stubborn/deluded to bring in. But I’m such a bad tipster that they’ll probably be down by Christmas.

How do you balance supporting Arsenal and rooting for your FPL players who might be playing against them?

My family came from north London (hence the Arsenal allegiance), but moved before I was born. So I’ve never been much more than a plastic fan as I never got to see them much as a kid and can’t afford to watch them now as I’m a writer! Having said that, I would never root against them for fantasy gain, mainly because I rarely buy their defenders, so I can wish for a 10-9 win for the Gunners in which my captain, playing for the opponents, gets six or seven goals.

There are too many to choose from, although the guy from Bahrain who attempted to destabilise his mate’s marriage to stay ahead of him in their mini-league still makes me laugh.

People can be obsessive about fantasy football – what’s the craziest story you’ve heard?

The guy from Bahrain who… hold on, I’ve done that one. There’s a whole chapter in the book on how winning turned one man into a very unhappy and addicted person. He’s out the other side now, but his story is really compelling.

How about famous people? Which celebs take their fantasy football seriously?

Loads of footballers. Andy Murray is deeply competitive, apparently. And Stuart Broad described being a manager of the week last season as one of his greatest ever sporting moments.

What have been the greatest moments in FF history?

So many of the winners seem to have secured the title with a dramatic last-day victory, but it is the controversies that linger on. Sergio Aguero taking his shirt off when he scored that goal for City to win the league in 2011/12 screwed a lot of people over. 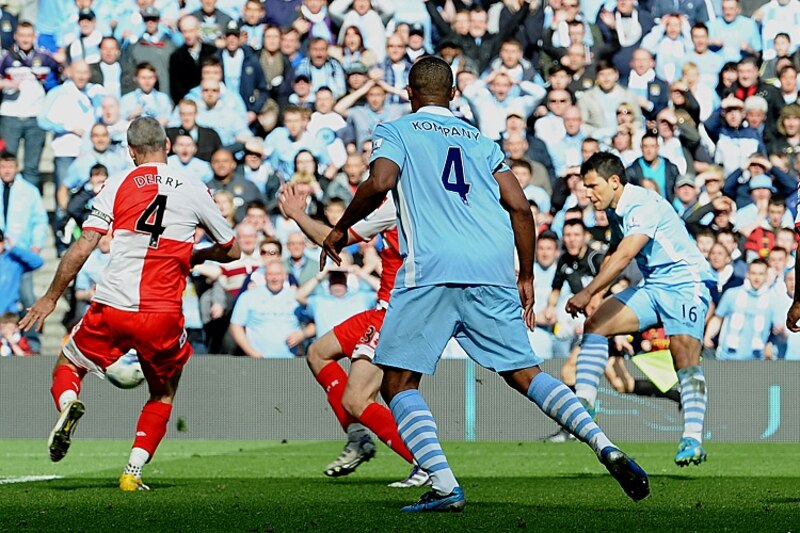 Aguero wins the league – and breaks fantasy hearts around the world

What are your tips for this season? Surprise players who you think will be good and the players you MUST own or risk annihilation?

Beware the World Cup effect. So many premium players are unlikely to hit the ground running this season that I fear we’ll all be wildcarding after about four weeks when they finally turn up for the party. Wolves could do well, so the likes of Diogo Jota need monitoring, and I think Bournemouth’s Josh King seems to be in a good place. Not having Mo Salah in your first-week team seems like an unnecessary risk, even if he does cost the earth. 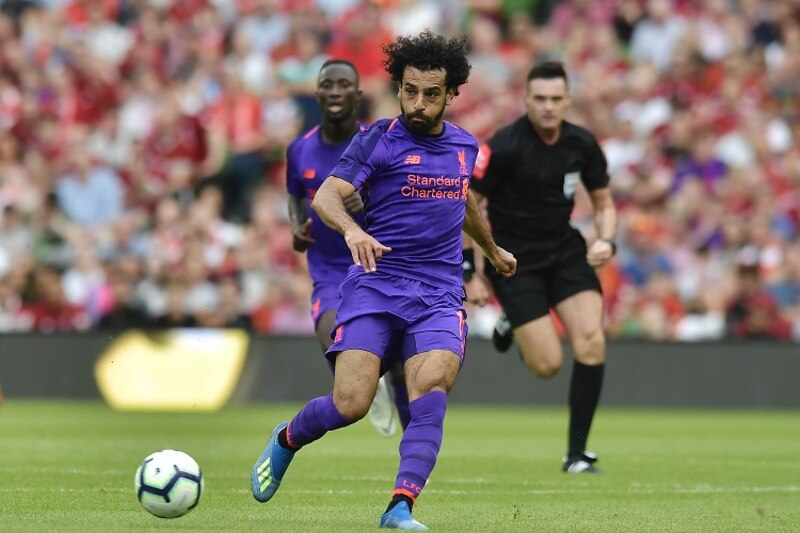 Yes, he’s £13m but are you really prepared to go without Mo Salah?

What’s the one stat that people should pay more attention to in fantasy football?

I’m a stats idiot. I have the maths skills of a particularly thick six-year-old.

Beyond forgetting to change your line-up, what’s the biggest mistake you can make in fantasy football?

Don’t ever leave your team unattended on a screen accessible to others. I heard one story of a vengeful wife transferring out a bloke’s entire team for a massive points hit.

What’s your best tip for people who play in mini-leagues with their mates?

Like most things in life, the more you put in, the more you’ll get out. But concentrate on your OR (overall ranking) and your mini-league performance will look after itself. You only need to start trying to second-guess rivals when the season reaches its climax.

What are the craziest mini-league stories that you’ve heard?

The forfeits for losing are the stuff of legend, and are well covered in the book. Personally, I love the league where the bottom 10 managers have to buy a curry for the top 10. And they all turn up for the meal dressed as the real-world manager who finished in the same league position as them. 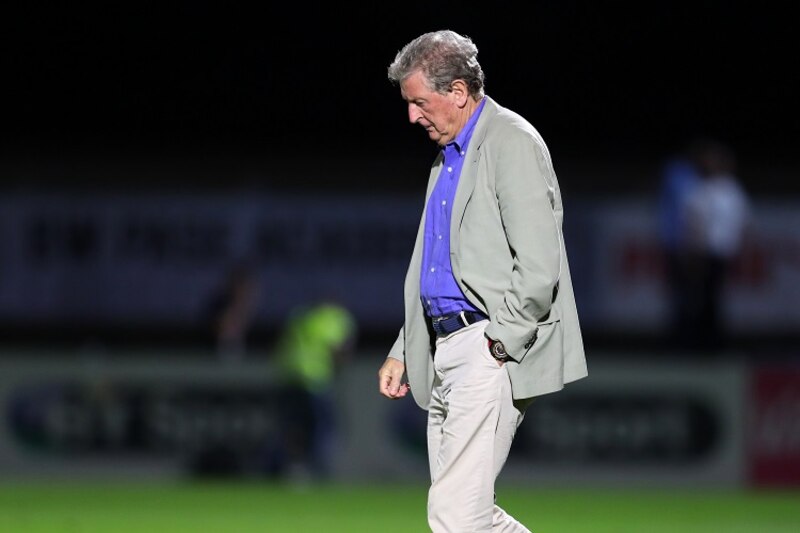 Do you think you could pull off this classic Roy Hodgson look?

What is the best reward/punishment you’ve heard for finishing top/bottom of a mini league?

Tattoos seem to be a common punishment. But there’s one league – The Forfeit League – that went way further than any other for the unlucky losers. In fact, they started doing monthly forfeits, they were that committed.

We’ve heard that you play in a league with Benny from Abba – how did that come about?

I was contacted by his stepson and he ended up inviting me into their mini-league, the LMCC Open. I beat Benny handsomely last season, but he was busy travelling the world being incredibly popular and successful, so who’s the real winner?

What would you say is a sign that people are taking their fantasy football too seriously?

If you spend more hours on your team than on your family and friends, then you’re in too deep. Unless you have no family or friends, in which case, carry on.

What’s your favourite fantasy football team name of all time?

I think it has to be ‘catsdontbendthatway’ for its sheer randomness. ‘The Special One’ was used by 487 managers in 2017/18, so 486 of them were entirely wrong.

What would you say to people whose weekend enjoyment hinges on their fantasy teams? And, for whom, a blank from their captain in an early Saturday kick-off can ruin it all?

Step back. Remember that the game is meant to be fun. Life will go on and there’s always next week/month/season. Expect the worst, while hoping for the best. That, of course, is all so much easier said than done.

Okay, bottom line, why should people stop tweaking their FPL teams to read your book?

I’ve tried to make the book as accessible as possible. So if you’re a die-hard, there’s plenty about your obsession and the history of the game. If you’re just finding your fantasy feet, there are lots of tips and tricks from some of the best managers out there. And if you’ve ever wondered why your other half is so mad about the game, that’s covered too. My proofreader likes neither football nor fantasy. She described the book as ‘thoroughly and surprisingly entertaining’. I’ll take that every day of the week.

Everything you need to know about the upcoming EPT Prague festival, specifically how to watch...

The 'Chase Your Dream' winner has been chasing her PSPC dream for more than three...

The prospect of winning a Platinum Pass through the Mega Path reignited Robinson's love of...

Answering the questions about poker buy-ins -- what are they, and how many do I need?

In celebration of our partnership with Oracle Red Bull Racing, one lucky PokerStars player will receive a chest containing $220K!

Answering the questions about poker buy-ins -- what are they, and how many do I need?

In celebration of our partnership with Oracle Red Bull Racing, one lucky PokerStars player will receive a chest containing $220K!